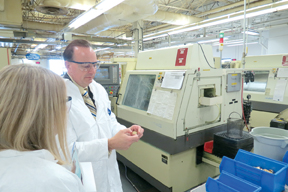 Welch Allyn showcased its redone headquarters at a ceremony marking the LEED certification. Work to renovate and expand the building wrapped up in August  2011, about three years after Welch Allyn broke ground on the project, according to the company’s director of operations, Scott Spanfelner.

Syracuse–based QPK Design was the architect for the project. Montour Falls–based Welliver was the general contractor.

Renovations and expansion at the building cost $35 million. Welch Allyn did not provide a breakdown of funding sources, but the company said it received grants from Empire State Development, the New York State Energy Research and Development Authority, and National Grid. It also received tax incentives through the Onondaga County Industrial Development Agency for the project.

“We created sight lines, large open hallways, and spaces to give greater visibility to the many working functions of our facility,” Spanfelner said during the LEED certification ceremony. “We created large windows and views into [the manufacturing space] in light of our pride as a manufacturer and to provide better visibility and connection to the other business functions in the facility.”

The building’s energy use has increased by just 8 percent, while its size has grown by 55 percent, according to Welch Allyn. Its water consumption has decreased by 25 percent, the company said.

In addition, Welch Allyn transplanted more than 100 trees that had been growing in the expansion’s footprint. And more than 70 percent of construction materials used in the project were manufactured within 500 miles of Welch Allyn.

“When it comes to being environmentally sensitive, ecologically aware, and energy efficient, this building and the renovation of the existing building have done some wonderful things,” said Eric Allyn, co-chair of Welch Allyn’s board of directors. “We’re not here pushing an environmental angle because it’s a fad.”

More than 1,200 employees work at the building. It houses 160,000 square feet dedicated to manufacturing and operations supporting manufacturing.

The headquarters building also has a customer-service center and space dedicated to product development and administration. In addition, the building houses a fitness center and a cafeteria for employees.

S. Richard Fedrizzi, the president, CEO, and founding chair of the U.S. Green Building Council, was on hand to make note of the building’s LEED gold certification. Fedrizzi is a native of Camillus.

Welch Allyn was founded in 1915. The company has 2,750 employees in 26 different countries. Its manufacturing operations are in Skaneateles Falls; Beaverton, Ore.; Tijuana, Mexico; Navan, Ireland; and Jungingen, Germany.