Servpro of Northern Onondaga County positions itself for growth 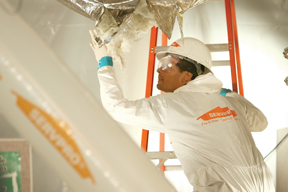 DeWITT — When natural disasters like Superstorm Sandy strike or the flooding that affected much of Central New York last summer occurs, businesses like Servpro of North Onondaga County swing into action.

However, there is a lot more to the disaster-recovery business than just cleaning up after large-scale natural disasters. In fact, much of the franchise’s business comes from more common events like fires and water leaks. And, whether the disaster is large or small, franchise owner John Halko says he takes pride in his crew’s ability to clean things up and make it “like it never even happened.”

This year marks Servpro of North Onondaga County’s 21st year in business and the franchise is settling well into the new 30,000-square-foot DeWitt facility it constructed and moved into about a year and a half ago, Halko says.

“We are positioned for any type of growth,” he says. The business has plenty of room now to store its equipment and even has room to bring items to its facility for restoration work.

While Halko declined to discuss specific numbers, he says his three-territory franchise — which includes eastern and northern Onondaga County as well as Oswego County — has generated growth for 19 out of the 20 years it has been in business. “I hope the sky’s the limit,” he says of future growth.

Currently, Servpro of North Onondaga County employs 31 people, but through the network of more than 1,600 franchise locations in the United States and Canada, the ranks can swell with temporary workers when larger projects demand it, Halko says. Last year, he brought on 150 temporary workers for one large-scale project.

That’s one of the major advantages of being a Servpro franchise, Halko says. Having access to the nationwide network is beneficial, especially when those large natural disasters strike.

Headquartered in Gallatin, Tenn., Servpro Industries, Inc., a 45-year-old company, was honored by Entrepreneur magazine as one of 2014’s top 10 franchises, ranked at number seven on the list.

According to Entrepreneur.com, Servpro is seeking new franchisees. Starting a Servpro franchise involves a total investment of between about $135,000 and $184,000, including a $43,000 franchise fee. Franchisees pay an ongoing royalty fee of between 3 and 10 percent.

Being part of that national network means franchises benefit from Servpro’s national advertising, Halko notes. The company advertises primarily on cable channels including sports, home and garden, and weather channels.

Locally, Halko says his franchise has benefited greatly from positive word of mouth, working to establish relationships with insurance companies and even from offering educational classes for real estate and insurance professionals.

“This has been a process for 20 years that we’ve built up to a good sized-franchise,” he says. Halko’s franchise consistently ranks as a top 100 franchise, based on revenue, within the Servpro network.

While his Servpro franchise has been here for two decades helping people clean up messes, Halko says his business also provides assistance before catastrophe strikes.

Servpro partnered with the American Red Cross for its Ready Rating program that helps businesses and individuals assess their disaster readiness. The program is free.

“An emergency plan is essential to small business,” says Vincent Mangan, marketing manager at Servpro of North Onondaga County. Up to half of small businesses that are struck by disaster without a recovery plan in place never reopen after the debacle.

Along with having a recovery plan, Halko and Mangan say there are a few steps all businesses should take to better prepare for disasters.

They include securing a backup energy source such as a generator and encouraging open communication with employees, customers, vendors, and utilities. Communicating before a disaster ever strikes is just as vital, if not more important, than communicating during the event.

Those steps, combined with a recovery plan, can go a long way toward helping a business weather a calamity and get back to business quickly.

Headquartered at 6800 Northern Blvd. in the town of DeWitt, Servpro of Northern Onondaga County (www.Servpronorthernonondagacounty.com) provides a range of restoration services including fire, smoke, and soot cleaning; water removal; dehumidification; mold mitigation and remediation; and document drying along with cleaning services that include air duct, carpet and upholstery, drapes and blinds, biohazard, and crime scene cleaning.