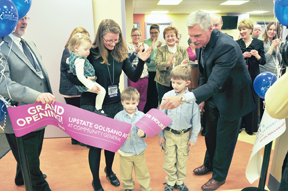 The center, which is named the Upstate Golisano After Hours Care, opened to patients Feb. 27 and launched with a formal ribbon-cutting ceremony March 6. The State University of New York (SUNY) Upstate Medical University, which owns Community General, is billing the center as the first urgent-care facility in the area dedicated to pediatric care.

“We’re there to take care of those issues that come up after hours,” says Dr. Alison McCrone, medical director at the pediatric urgent-care center. “We’d like to work closely with all of the primary-care doctors in the area. Our goal is to complement their services so that we can bridge the gap between their offices and the emergency room.”

The pediatric urgent-care center will typically see cases such as dehydration, sprains, strains, lacerations, fevers, and upper-respiratory infections, McCrone says. It will also be equipped to provide X-rays, intravenous rehydration, and other lab tests.

The center will be open on weekdays from 4 p.m. to 11 p.m. and on weekends from noon to 11 p.m. — hours when a parent’s other choices may consist of taking a child to the emergency room or consulting with a doctor by telephone.

“It’s difficult over the phone, because a child can’t speak and tell you what’s wrong,” McCrone says. “It’s useful to have someone available who is used to evaluating kids.”

About five people will staff the pediatric urgent-care center at one time: a physician, a pediatric nurse, two medical office assistants, and a staff member dedicated to registering patients.

Community General hired nursing staff members and medical office assistants to operate the pediatric urgent-care center, McCrone says. The new hires were a mixture of full-time and part-time workers, and McCrone estimates the hospital added the equivalent of about six full-time employees for the center. A pool of 10 doctors will work rotating shifts at the urgent care.

The pediatric urgent-care center has four patient rooms, each of which is equipped with a television. The center’s waiting room also has a television, as well as a Microsoft Xbox 360 Kinect video-game system and a 250-gallon fish tank that was donated by the Children’s Miracle Network.

“Distraction is key for a child when they’re sick so they don’t focus on their illness,” McCrone says.

The center received some upgrades to prepare it for hosting children. In addition to the televisions, video games, and fish tank, it has new flooring, new lighting, and new paint in what McCrone described as “cheerful colors.”

Syracuse–based Henderson-Johnson Co. Inc. served as the general contractor for renovations. McCrone did not know the exact square footage of the pediatric urgent-care center.

McCrone was not ready to predict the number of patients the center will see in a typical day. Data is not yet available from the center’s first week of operation, she adds.

“We’ve only been open a week,” she says. “I would hope our reputation will encourage people to come visit us.”