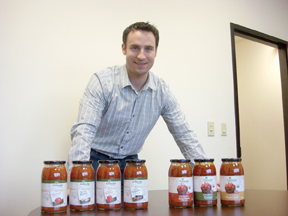 DeWITT  —  The sauce is flowing a little faster these days at Giovanni Food Co., Inc.

The DeWitt manufacturer of tomato-based products recently started producing a new line of private-label barbecue sauce that will have it filling more than 1 million jars a year. And it is launching a new brand of its own, called Greenview Kitchen — a premium pasta sauce with a focus on natural ingredients and environmentally friendly production.

Giovanni Food has added employees to keep up with the new production. It now has 65 full-time workers, up from 62 just two weeks ago. The firm also employs about 10 temporary workers.

The company has added a dozen full-time workers since the end of November, when it employed 53 full time. Giovanni Food also had eight temporary-to-hire employees at that time.

“I didn’t know that we would be adding this many employees,” says Louis DeMent, general manager at the food manufacturer. “It’s definitely been beneficial to us.”

Much of the growth is coming from a new three-year private-label contract the company signed to produce barbecue sauce. DeMent declined to name the contracting company or the brand of barbecue sauce that Giovanni Food is producing for it, but said production will be “about a couple million units a year.”

Giovanni Food started bottling under the new contract Jan. 9. The contract calls for the manufacturer to produce packages of six jars of barbecue sauce. However, Giovanni Food does not currently have machinery to create six packs — it previously only produced packages of 12 jars.

Equipment to create six packs will be in place in June or July, DeMent says. In the mean time, the company is packing those units by hand. About five of its temporary workers were hired to work on that hand-packing operation.

The equipment to create six packs carries a price tag of about $450,000. Giovanni Food is financing its purchase with a loan from Alliance Bank, N.A., cash reserves, and funding from the company contracting for the barbecue sauce.

“The new contract is definitely a significant source of growth for us,” DeMent says. “And all of our other business has grown, generally, which we’re very thankful for.”

In addition to barbecue sauce, Giovanni produces pasta sauce, pizza sauce, juice, and salsa. The company traces its history to 1934, when the DeMent family started an Italian-style restaurant in Oswego and sold its sauce to customers. Today, Louis DeMent owns the company with his mother, Mary DeMent.

Louis DeMent declined to share Giovanni Food’s revenue in 2011, but says he expects revenue to increase by 10 percent in 2012. Branching out from pasta sauce will likely allow the manufacturer to avoid summertime shutdowns, which have been necessary in the past because of seasonal sauce-demand slowdowns.

“It will help us keep our production steady,” DeMent says. “That has been a goal of mine.”

Giovanni Food manufactures its products at its 67,000-square-foot headquarters at 6050 Court Street Road in DeWitt. The company also owns a 60,000-square-foot facility at 4645 Crossroads Park Drive in Clay, which it uses as a warehouse.

DeMent says he eventually wants to consolidate Giovanni’s operations under one roof. However, he does not have any specific plan to do so at this time.

“We’re just trying to get used to our current situation before making anything that’s too major of a jump,” he says.

Giovanni Food could also add more employees by the end of the year, DeMent says. It currently has three production lines at its Court Street Road facility but operates only two at a time. DeMent would like to add enough employees to operate all three lines at once.

That would likely require a total of 70 full-time employees, he says. It would allow the manufacturer to meet its production requirements by operating for 40 hours per week. Giovanni Food is currently running production six days a week for 10 hours each day, DeMent says.

Giovanni Food purchased its Court Street Road factory for $2.5 million in 2009 from Ventre Packing Co., Inc., according to the Onondaga County Office of Real Property Tax Services website. The company used a mix of financing that included a loan from Alliance Bank, a U.S. Small Business Administration loan, and a note from the seller. It had previously based production from its Crossroads Park Drive facility.

As Giovanni Food is launching its Greenview Kitchen premium pasta sauce, it is simultaneously kicking off a partnership with a program known as Green-e Marketplace.

“We’re trying to do everything we possibly can to be a green manufacturing facility,” says Tammy Panipinto, director of business development at Giovanni.

The manufacturer will label its Greenview Kitchen line with a Green-e logo so that customers will be able to see its participation in the program.

“We believe in it, and hopefully we find consumers who identify with it,” DeMent says.

Giovanni started meetings to try to get Greenview Kitchen onto store shelves at the beginning of February. The sauce is currently available on the company’s website (www.giovannifoods.com).