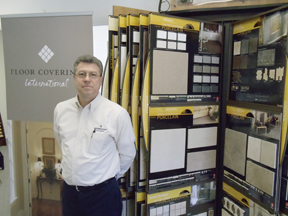 VESTAL — After spending 36 years working in the electronics industry, John Giangrieco is finally doing something he always wanted to do — run his own business.

Giangrieco spent 34 years working at Universal Instruments, a Conklin–based provider of automation and assembly equipment products for the electronics-manufacturing industry, before the company downsized and left him without a job in March 2008. Over the past few years, he held a few other jobs in the electronics industry that just didn’t suit him, so last summer, he decided it was time to go into business for himself.

His first thought was to open a franchise. “At my age,” the 57-year-old says,” I don’t have a lot of time to start from scratch.” He liked the idea of having all the steps toward opening a business set out for him.

Knowing that he didn’t want to embark on anything in the food industry, that he had to be able to start the business as a one-person operation, and that he wanted to keep his initial investment below $200,000, Giangrieco began his search for a suitable franchise.

“It was a wide-open search,” he says, but eventually, with the help of New York City franchise consultant Thomas Scarda of FranChoice, Giangrieco was able to narrow it down to eight possible franchises.

His options included a painting business, vinyl and leather repair and restoration, and even a pressure-washing business, but Giangrieco eventually settled on Floor Coverings International (FCI), an Atlanta, Ga.–based provider of floor coverings that has 93 United States franchises and 11 Canadian locations.

“I met with the president of the company,” he says. “I met with a couple other franchisees.” The company offers a great support system, he says, which added to its appeal.

“There were a number of things that made me think this looked like a business I could fit into,” he says. Giangrieco followed through by attending a “discovery day” with three other potential franchisees and decided to sign on with FCI last August. By the end of October, he was finished with all his training, and he opened his FCI location at 1500 Vestal Parkway East on Nov. 1.

“This is a lot different than the standard box store,” he says of his FCI franchise. Where a typical flooring store features products on display that customers view in the store, FCI switches things around and takes the product to the customer, Giangrieco says.

“That’s what people do anyway,” he says. They visit the store and take samples home to see how the product fits in with their wall color, furniture, etc.

“I try to facilitate that process to make it more simple for the homeowner,” he says. That even includes software that allows him to take a picture of a room and digitally replace the existing floor with samples of other options, he says. People may also visit Giangrieco’s 1,350-square-foot store by appointment.

Initially, Giangrieco says he focused his marketing plan on the Internet, but he found that just wasn’t getting his name out in front of people. With two well-known large competitors — Warehouse Carpet Outlet and Endwell Rug — Giangrieco says customers need to know about his business up front and not just when searching for floor coverings online.

With that in mind, he switched his marketing focus over to newspaper and radio advertising and says he’s already starting to build that name recognition. He declined to say how much he has spent on marketing.

So far, business is slower than he’d like but it is starting to build under the new marketing efforts. “I’m landing jobs,” Giangrieco says. Still, he’s only about 20 percent of the way to the sales goal he’d hoped to achieve by this time. With that in mind, he lowered his goal for this year back a bit to what he calls a more “realistic” level. Giangrieco declined to share specific sales projections, but says he is encouraged by the improved quality of leads his new marketing efforts are bringing in. He hopes to be able to hire a sales and design associate by the end of this year.

To help further spread the FCI name, Giangrieco is working on networking and building connections. He participated in the recent Southern Tier Home Show and will participate in the Greater Binghamton Chamber of Commerce’s Expo 2012 event.

He’s also focusing on building a good reputation with his customers to help boost word-of-mouth benefits. “It’s going to be one customer at a time getting positive customer experience with Floor Coverings International,” he says.

FCI sells an array of floor coverings from carpeting to tile to hardwood. Giangrieco’s business is online at www.binghamton.floorcoveringsinternational.com.