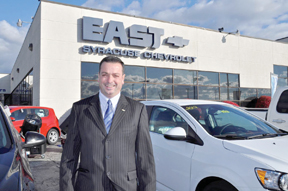 EAST SYRACUSE — The longtime owner of East Syracuse Chevrolet wanted his employees to have a future at the automobile dealership when he sold the business at the end of 2011.

“The first, most important thing is that I could feel comfortable about my employees having a future here,” says Sidney M. Greenberg, who has been dealer-operator of East Syracuse Chevrolet since 1982. The dealer-operator owns the business and is the dealer of record for Chevrolet.

Greenberg sold the dealership to 25-year East Syracuse Chevrolet employee Gino Barbuto in a deal that closed Dec. 29 (which we reported on cnybj.com that day). Financial terms of the transaction were not disclosed.

Barbuto had been an operating partner, owning 15 percent of the dealership since 2010. He has been its general manager since 2009, and has been discussing an ownership change with Greenberg for about five years.

“I am not a youngster,” says Greenberg, who did not specify his age. “It came to me that when I got ready to pack it in, [Barbuto] was the guy. [I wanted to do] more than just sell it to some stranger and walk away.”

Greenberg, who started working at East Syracuse Chevrolet in 1949 before becoming dealer-operator in 1982, does not plan to walk away. Barbuto has guaranteed him a place at the dealership in the future, he says.

“I’ve never prepared myself for retirement, and I wouldn’t like the retired life,” Greenberg says. “And I have been assured by Gino that I will always have a place to come.”

Greenberg will likely fill a consulting role at the dealership, says Barbuto, who was first hired at the dealership in 1986 as a service adviser. Since then, he has held a variety of roles, becoming service manager in 1992 and new-car manager in 1998. Barbuto also held the position of used-car sales manager before taking over as general manager in 2009.

Barbuto is now East Syracuse Chevrolet’s dealer-operator. His acquisition of the dealership gave him all of its stock and assets, including its 65,000-square-foot facility at 1 Chevy Drive in East Syracuse, which opened in 1986. That facility and its land are valued at $2.2 million, according to records from the Onondaga County Office of Real Property Tax Services.

In addition, Barbuto also acquired the dealership’s stock of vehicles. East Syracuse Chevrolet currently has about 280 new cars and 120 used cars in stock, he says.

Barbuto does not plan any major operational changes at the dealership. He does want to expand the business, though.

At the end of last year, East Syracuse Chevrolet was on pace to have sold about 1,500 new and used vehicles in 2011, Barbuto says. He expected revenue for the year to total $45 million.

In 2012, Barbuto would like to increase revenue by 5 percent. He also wants to expand East Syracuse Chevrolet’s used-car business, but he did not provide any used-car sales estimates.

The dealership currently employs 77 full-time workers and 1 part-time worker. It could add between three and seven employees in the next year if sales are strong, Barbuto says. Plans for adding new employees in different departments are not final, but they would not all be sales staff members, he says.

Starting in March, East Syracuse Chevrolet will undergo a series of renovations, Barbuto says. It will receive a new façade and showroom upgrades, as well as a new business center.

The renovations are being coordinated by Detroit–based General Motors (NYSE: GM), Chevrolet’s parent company, according to Barbuto. General Motors has hired the global architecture, design, planning, and consulting firm Gensler to design the upgrades, which will make the dealership “image compliant” with other General Motors dealers, he says.

“I think it’ll give us a fresh look,” Barbuto says. “We’ll be here a long time to come.”

Final plans for the upgrades have not been approved, and no contactor has been selected to carry out the work, according to Barbuto. He did not have a cost estimate for the project.