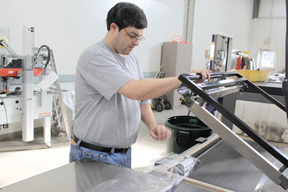 “It’s not an acquisition of any of the Sheltered Workshop former buildings, assets, or anything like that,” Markie clarifies. It’s purely a transition of those clients from one service provider to another.

CVI is currently leasing the Court Street space from Sheltered Workshop while it seeks out new space, says Markie, who didn’t know the size of the current space. At this point, he says the agency doesn’t know if it will lease space for just that service/location or if it will look for a large location that can house several CVI operations. CVI currently operates three other workshop locations around Broome and Tioga counties.

Taking on the Sheltered Workshop services not only keeps 78 people employed, it also boosts revenue at CVI by about 20 percent through the new client contracts that came with the transition, Markie says. CVI is continuing all the contracts Sheltered Workshop had prior to the transition. And, it will result in about eight to 12 new staff positions at the agency, which employs the disabled in a variety of jobs including packaging, assembly, order fulfillment, and shipping/receiving.

In a time when the agency has battled through several years of funding cuts, to be able to grow the agency, even if only modestly, is an achievement, Markie says. “It says a lot about our organization.”

It also sets the stage for future growth, he hopes. While the Sheltered Workshop crew doesn’t add any new service offerings to customers CVI does business with, Markie says it does increase CVI’s capacity, which means they can take on more and bigger contracts. CVI provides an array of packaging services to companies such as Frito-Lay and Temple-Inland.

“These are vital services,” Markie says. That’s why it was so important to keep providing those services to the former Sheltered Workshop clients, he adds.

“We’re just getting to know them,” he says of the new consumers. “They have a great work ethic and dedication.”

The transition between the two organizations was nearly seamless, Markie notes, because they provide such similar services and work with many of the same customers.

CVI is a subsidiary of ACHIEVE, a nonprofit provider of services to individuals with intellectual and other developmental disabilities. The agency, based in Binghamton, serves more than 900 individuals daily.

ACHIEVE (www.achieveny.org), formerly known as the Broome-Tioga ARC, reported revenue of $18.1 million and expenses of $17.6 million in its 2010 annual report. Most of the agency’s revenue comes from state and federal funding for program services.

The agency employs about 470 people.