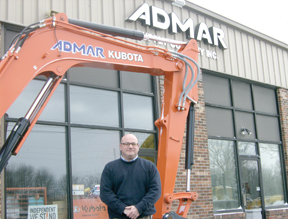 DeWITT — The Buffalo Bills of the National Football League have reached an agreement that designates ADMAR Supply Company as the team’s “official construction-equipment supplier.”

ADMAR, based near Rochester, describes itself as the “largest,” independently owned construction equipment rental and sales company in New York state and northern Pennsylvania

ADMAR operates a Syracuse–area location in a 15,000-square-foot building at 6014 Drott Dr. in DeWitt, which runs parallel with Interstate 481.

The firm already has an existing partnership with the Bills, supplying a variety of equipment to Ralph Wilson Stadium in Orchard Park and its training camp at St. John Fisher College in the Rochester suburb of Pittsford.

This agreement, which ADMAR announced Feb. 17, will expand that relationship, as the Bills are poised for a $130 million stadium renovation.

“Anything they need for the project … they can pull out of this store if they don’t have it available,” Voegler says.

The Bills asked ADMAR to become a partner with them in a sponsorship level and be their official construction-equipment supplier, says Laurie Robb, director of shared services for The DiMarco Group, ADMAR’s parent company.

When asked if the agreement involved any financial transaction between ADMAR and the Buffalo Bills, Robb declined to comment.

ADMAR views it as an “expansion” of its existing partnership with the Bills, Robb says. The team can call the company “on a day’s notice” and get whatever equipment it needs, as ADMAR works with a shared fleet, she adds.

That means it can get equipment from locations in Buffalo, Rochester, DeWitt, or at ADMAR’s newest location in Erie, Pa., Robb says.

The DeWitt location has 23 full-time employees, Voegler says. ADMAR employs about 200 people at its eight branches in New York and Pennsylvania, Robb adds.

The ADMAR logo gets placement on the ribbon board during games at Ralph Wilson Stadium.

The Ralph Wilson Stadium renovation and improvement project began this past June and includes new technology implementation, a new west-end plaza with a new team store and enhanced gate entries, and renovated and expanded concessions, restrooms, and a training facility.

“ADMAR not only helped us with our training camp construction-equipment needs in [Pittsford], but will play a vital role in the renovation project at Ralph Wilson Stadium in Orchard Park,” Bruce Popko, Bills senior vice president of business development, said in an ADMAR news release.