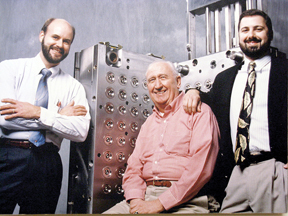 AUBURN  —  Currier Plastics’ plans to expand its facility in Auburn are in limbo while the company waits to learn the status of $1.75 million in state aid.

The manufacturer is trying to find out why it did not receive a $750,000 capital grant it applied for through New York’s Regional Economic Development Council initiative. It is also waiting to learn the status of $1 million in state funding the city of Auburn requested to assist the company’s expansion.

Currier is doing some preliminary work to prepare for the expansion, but the funding situation has prevented the company from hiring an architect or finalizing plans, according to Alan Gross, vice president of operations at Currier Plastics.

“Right now we’re uncertain that we can move forward onsite,” Gross says. “We’re in a bit of a holding pattern.”

The company estimates the expansion would cost $19 million over five years,

$7.6 million of which would go to site development, construction, and infrastructure. The remaining cost would be for new equipment, Gross says. Outside of state aid, Currier plans to fund the project with private financing and industrial bonds.

Currier would expand onto nine acres of adjacent land, Gross says. It would add manufacturing space and new equipment.

Currier Plastics is on pace to generate about $22 million in revenue in 2011, which would be an increase of about 20 percent over 2010, Gross says. The firm is looking to increase revenue by 15 percent in 2012, he says.

The company wants to expand at its current location in Auburn, Gross says. But it will need to increase its work force by 50 employees no matter what happens with its current facility.

Company officials have not finalized contingency plans to follow in the event that they do not receive additional economic-development funding, Gross says. But Currier could decide to relocate, he says.

Currier has looked at other sites, including locations in Seneca County, Wayne County, Onondaga County, and elsewhere in the Auburn area. Company officials have also weighed the prospect of moving to Pennsylvania, New Jersey, Virginia, and Florida.

Currier Plastics has had to perform some makeshift upgrades to its facility as it waits to learn the fate of its economic-development funding, Gross says.

“To accommodate the existing growth within our four walls, we’ve had to spend $200,000,” he says. “The longer the project’s delayed, the longer we’ll have to continue to do that kind of thing.”

The Central New York Regional Economic Development Council recommended that the state award a $750,000 capital grant to support Currier’s expansion. But the state did not include that grant when it announced its regional council funding Dec. 8.

The city of Auburn’s Office of Planning and Economic Development is trying to find out why the grant was not approved for Currier, according to the office’s director, Jennifer Haines. The office is also searching for a way to have the funding approved, she says.

“We’re still not sure how some of those cuts were made — if it was related to bigger-picture issues or if there are eligibility issues with the specific programs,” Haines says.

ESD will work to support projects that did not receive funding and help them reapply, Shafran said.

The state did award Currier $1 million in Excelsior Jobs Program tax credits through the regional council initiative. Those credits are for businesses that create jobs and capital investments and can typically be claimed over a 10 year period.

The $1 million that has been awarded is for expansion at Currier’s current facility, Gross says.

The state also has yet to decide whether to award $1 million in funding that the city of Auburn requested to assist Currier’s expansion. It has not indicated when it will make a decision on that funding, Haines says.

Auburn requested aid from the state’s Economic Transformation Program, which is designed to help communities affected by closing correctional facilities and juvenile justice facilities. It also applied for an Economic Development Purposes Grant, which the state makes available for projects that create or retain jobs and generate economic activity.

Half of the city’s requested funding would go to help Currier Plastics purchase land for its expansion. The other half would go toward infrastructure improvements.

Auburn will also develop a package of local incentives to help the Currier project, Haines says. Those incentives could include mortgage-tax exemptions, payment-in-lieu-of-taxes agreements, and Community Development Block Grants, she says.

“We should be able to get local resources secured for them within a couple of months’ time after we know what’s going on with the state,” Haines says.