What channel is the Syracuse-West Virginia Camping World Bowl game on? 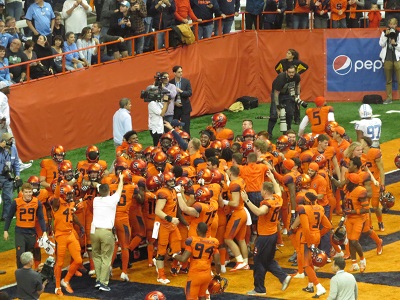 The game is set to kick off at 5:15 p.m. at Camping World Stadium in Orlando and will be shown on ESPN nationally. You can also stream it on the Watch ESPN app. Dave Flemming, Rod Gilmore, and Quint Kessenich will be the announcing crew.

Syracuse made the Camping World Bowl — the ACC’s top bowl slot outside the College Football Playoff and New Year’s Six Bowl slots — after a breakout 2018 season under third-year head coach Dino Babers. Syracuse University on Dec. 12 announced it has extended the contract of Babers to keep him at the helm “well into the future.”

This will be the 61st all-time meeting between Syracuse and West Virginia. The Orange hold a 33-27 lead in the series. The teams last met in the 2012 Pinstripe Bowl in the Bronx, a game the Orange won, 38-14.

Both West Virginia and Syracuse will be without some key players in the Camping World Bowl. The Mountaineers will not have star quarterback Will Grier, offensive tackle Yodny Cajuste, and wide receiver Gary Jennings, Jr., who are skipping the bowl to save themselves for the upcoming NFL Draft. Syracuse will be without defensive end Alton Robinson and defensive tackle McKinley Williams, who did not accompany the team to Orlando for “personal reasons.” Defensive back Antwan Cordy will also not suit up for the Cuse as he continues to deal with a personal issue.