What channel is the Syracuse basketball game on at Florida St.? 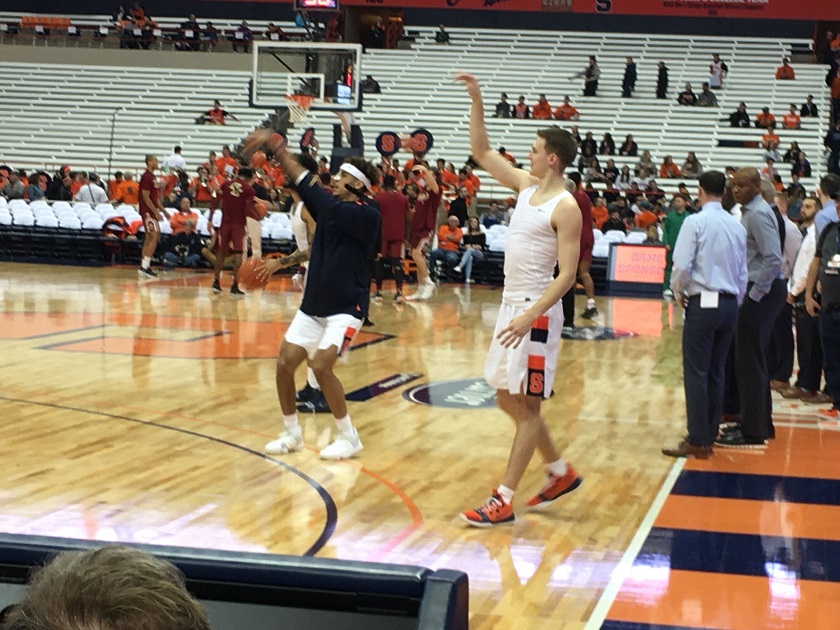 The game tips off just after 12 p.m. at the Donald L. Tucker Center in Tallahassee, Florida and will be televised nationally on ESPN2. You can also stream it through the ESPN app. Doug Sherman and Corey Alexander will be the announcers.

Syracuse (No. 69 in the NCAA’s NET Ratings) hits the road following a disappointing 79-74 home loss to NC State on Tuesday night. The Orange caught an unlucky break when their best player and leading scorer Elijah Hughes suffered a muscle strain in pre-game warmups. Hughes tried to play but had to take himself out of the game after just three minutes. An outmanned Syracuse team put up a good fight, but in the end could not withstand a barrage of three pointers by the Wolfpack. A Syracuse basketball spokesman tells CNYBJ that Hughes will be a gametime decision on Saturday.

Florida State enters the Syracuse game following a 70-65 loss at Duke on Monday night. That snapped a three-game Seminoles winning streak. Florida State is a perfect 12-0 at home this season. The Noles are led by 6’7 sophomore guard Devin Vassell (13.4 points, 5.3 rebounds per game). Vassell has made 37 three-pointers this season and is shooting 42 percent beyond the arc.

Saturday’s game is the 12th all-time meeting between Syracuse and Florida State, with the Orange leading the series 7-4. The Seminoles have won the last two matchups, including a dominating 80-62 victory in last year’s game at the Carrier Dome. FSU also won the last meeting between the teams in Tallahassee, taking down the Orange 101-90 in 2018.

ESPN’s College Basketball Power Index (BPI) gives Florida State an 83.6 percent chance of beating Syracuse. The projected point differential is 11.2 points. The sports analytics website TeamRankings.com says the Seminoles have an 80.2 percent chance of winning the game. That same site projects that Syracuse’s current probability of making the NCAA Tournament has sunk to just 7.1 percent after losing three of its last four games.