What channel is the Syracuse basketball game on? (vs. St. Bonaventure)

The game tips off just after 2 p.m. at the Carrier Dome and will be televised on ESPNU. You can also stream it through the Watch ESPN app. The announcers are Will Fleming and Corey Alexander.

Syracuse enters the St. Bonaventure game after a week off since it beat Arkansas State 82-52 last Saturday. The Orange started sluggishly and trailed the Red Wolves by 11 points midway through the first half before asserting control and pulling away for a much-needed blowout win. That snapped a two-game Orange losing streak.

St. Bonaventure comes to the Dome after having lost three straight games. The Bonnies last played on Dec. 21, when they lost 64-59 at Northeastern, a team Syracuse has also faced this season, but defeated.

This season has been a struggle for St. Bonaventure after last year’s outstanding campaign in which the Bonnies posted a 26-8 record and qualified for the NCAA Tournament. One of the highlights of that season for St. Bonaventure was its 60-57 overtime win at Syracuse, three days before Christmas.

The graduations of do-everything guards Matt Mobley and Jaylen Adams significantly weakened the Bonnies heading into this season. St. Bonaventure was also hurt by not having senior forward Courtney Stockard for the first six games of this year as he recovered from knee surgery in the offseason. The Bonnies won three straight contests upon his return to the lineup, before losing the next three games. Stockard leads the team in scoring (19.0 points per game) and rebounding (6.5 boards a contest).

What’s at stake for Syracuse?

Syracuse has already lost more non-conference games this season, four, than any Orange team that made the NCAA Tournament has ever lost in the Jim Boeheim era. So obviously, the Orange can’t afford another defeat in their final non-conference game of the season, especially at home against a team ranked 196th in the NET Rankings, the NCAA’s new tool for selecting and seeding tournament teams. 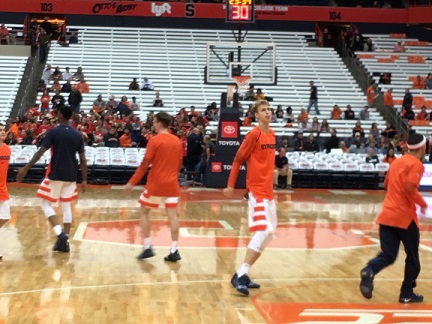 Syracuse is currently sitting at No. 66 in NET after tumbling from the high 20s to the mid-70s in that key metric following the Orange home losses to Old Dominion and Buffalo. The Cuse is now trying to fight its way back inside the NCAA bubble. The Orange will need to close out their non-league schedule with an emphatic victory and then go win a lot of ACC games, starting in the New Year.

Saturday’s game is the 29th all-time meeting between Syracuse and St. Bonaventure, with the Orange holding a 24-4 lead in the series. Last year’s Bonnies victory at Syracuse snapped a 14-game Orange winning streak in the series.