What channel is the Syracuse basketball game on vs. Boston College? 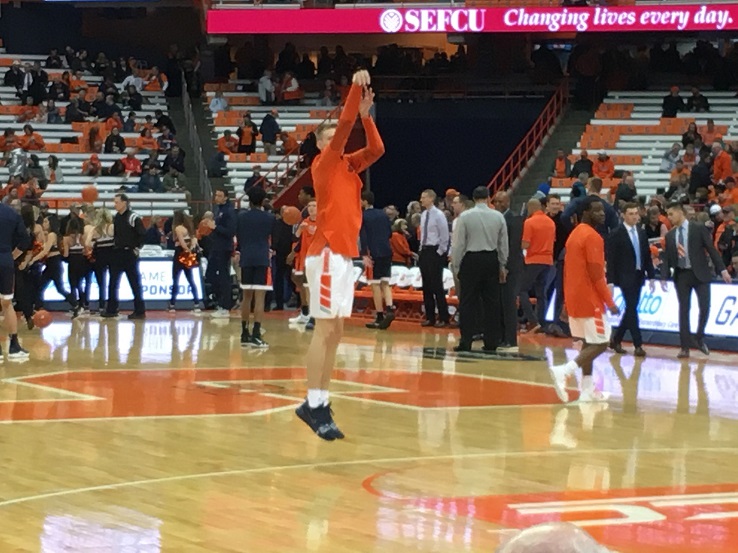 The game tips off just after 6:30 p.m. at the Carrier Dome and will be televised on the ACC Network, available to subscribers of many cable and satellite TV packages. You can also stream it through the ESPN app as long as you receive the ACC Network through your TV subscription. Steve Schlanger and Dan Bonner will be the announcers.

Syracuse, currently ranked No. 85 in the NCAA’s NET Ratings, is coming off a 63-55 upset win in overtime at Virginia last Saturday afternoon. The Orange blitzed the Cavaliers with 20 points in the five-minute overtime period after scoring just 19 points in the 20-minute second half. Joe Girard led the Cuse with 19 points and Elijah Hughes added 18.

Boston College, ranked 152nd in NET, enters the Syracuse game after a 71-52 home loss to Georgia Tech last Saturday, just one game after BC had itself upset Virginia. The Eagles, like Syracuse’s last opponent, struggle on the offensive end. BC averages 65 points per game on 40 percent shooting from the field and 30 percent from three-point range.

Wednesday’s contest is the 76th all-time meeting between Syracuse and Boston College, with the Orange leading the series 49-26, including a 9-3 lead since joining the ACC six years ago. Syracuse won both of last season’s matchups: 67-56 at the Dome and 77-71 at Boston College.