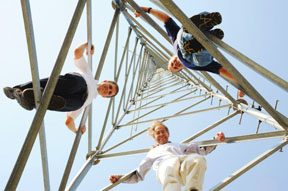 ITHACA — An Ithaca company has plans to export a new type of wind turbine throughout the country and eventually around the world.

Weaver Wind Energy began three years ago. The business grew from work its founder, Arthur Weaver, did with 10-year-old Renovus Energy, also founded by Weaver and based in Ithaca.

Renovus works on all sorts of residential and commercial renewable-energy projects. Weaver says he saw firsthand many of the problems with small wind turbines.

“Most of them had issues,” he says. “They had mechanical or electrical issues that made them less than satisfactory.”

Weaver Wind is aiming to design something better.

The company’s first turbine produces five kilowatts, enough to provide about half to two-thirds of the energy it takes to power a small American home. The small wind-turbines category includes anything up to 100 kilowatts so future units could be used in much larger applications, Weaver says.

Weaver Wind is preparing to have its turbine certified, a necessary step before commercial sales. The company has two units that have been up and running for more than seven months, Weaver says.

It plans to put up at least two more units and as many as six more before the cold weather arrives to gather more data. Weaver says the company will start the certification process, which takes about six months, next spring.

The turbine design also has a patent pending. The company expects to have its first turbine on the market in 2014.

Nearly all the damage done to most small turbines happens in winds greater than 30 mph, while nearly all the energy they produce occurs at winds below that speed, Weaver explains. So, his company created a “smart” turbine, he says.

The unit is riddled with sensors that measure all sorts of data. An algorithm then determines whether the turbine should be running, Weaver says.

“We measure anything that is pertinent to the health and safe operation of the turbine,” he says.

That includes not only wind speed, but also revolutions per minute, current, voltage, and more.

The design features a mechanical innovation, which turns the turbine blades out of the wind when conditions warrant. It’s an active mechanism, Weaver says.

That differs from current methods of turning small turbines that rely on springs or levers and use the wind itself to force the blades out of position in rough conditions, he explains.

The potential market for the turbines is global, Weaver says. In the U.S., most of the nation’s wind energy is produced in the center of country in a corridor stretching from Minnesota to Texas.

That region will be fertile territory for Weaver Wind, Weaver says.

Weaver Wind sources components for its turbines from around the U.S. and assembles them in Ithaca. The firm has three employees along with two interns. To this point, it is self-financed, Weaver says.

Weaver Wind has applied for a grant from the New York State Energy Research and Development Authority. The company may also look to bring in outside investors at some point, Weaver says.