Vicks: A printing company adapting in the digital age 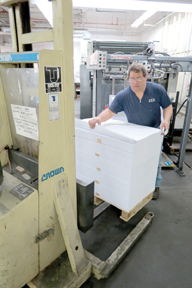 What if I should fall right through the center of the earth … oh, and come out the other side, where people walk upside down? — Alice in Wonderland

YORKVILLE — Anyone operating a printing company today understands how Alice felt. In the past 13 years, over 10,000 establishments have vanished as the industry shrinks in the wake of the Internet and digitization. The consolidation has been hastened by the Great Recession of 2008 and early 2009, but structural changes have certainly redefined the industry.

No one understands the impact of this upside-down world better than Dwight E. Vicks III. Vicks, who is the president and third-generation owner of Vick’s, Inc., has reinvented his operation, headquartered at 5166 Commercial Drive in Yorkville. The digital revolution has forced him to respond to his publishing customers. “Vicks [Inc.] doesn’t live in the world of denial,” says the company president … The business model for book publishers has changed … [Formerly], 20 percent of their titles produced 80 percent of their sales, which meant that most books sat in inventory or were [ultimately] shredded. The digital age allows publishers to produce only those copies that sell, which eliminates obsolescence, reduces their inventories, and frees up cash.”

In 2003, Vicks made a major investment in digital publishing. The company allocated thousands of square feet of its 200,000-square-foot facility to new, high-speed, digital presses whose output matches the quality of offset printing. The printing operation is complemented by a full-service bindery as well as a fulfillment and distribution center. “We run three shifts in the digital [department] to be responsive to our customers,” says Vicks … They expect us to offer a [turn-key] service where they simply send us instructions and a digital file; we do the rest.”

Doing the rest also means “… having the capability to repurpose content for customers anywhere in the world,” says Vicks. [To accomplish this], we have created a strategic alliance with Absolute Services, Inc. of Towson, Maryland … This gives us the capability of providing editorial services such as content development, template setups, and data conversions … Absolute also owns a production facility in the Philippines to support content customization, editing, layout, and printing.”

Vicks has also struck up an alliance with Caligraving, Ltd., a specialist book printer located in Thetford, UK, 85 miles north of London. The British company has been involved in book publishing since 1956, specializing in the same field as Vicks – music and educational books.

“Caligraving gives us access to the Euro Zone … It also allows us to respond to a publisher who wants 2,000 books shipped in the United States and say 250 to England. Vicks can print and distribute the U.S. copies … Instead of printing 250 books and shipping them to England, Caligraving can handle the [European] order … We simply send them a [digital] file … [On the other hand], if Caligraving receives an order, the process also works in reverse.”

Change is not new at Vicks. Dwight Vicks III remembers his father’s gamble in 1957 when he bought a 29” Miehle press, thus introducing offset printing into a letterpress plant. Dwight E. (Duke) Vicks, Jr. mortgaged the company against the wishes of his father’s advisers. The gamble paid off as offset printing rapidly replaced letterpress. In the 1950s and 1960s, Duke Vicks also had to gamble on a new direction for the company as the old customers, many in the defense business, left the area. He diversified by entering the book-printing business with regular trips to New York City.

In addition to Vicks as president, the executive team includes Leo McCoy as CFO, Frank Driscoll as general manager, Michael O’Donnell as manager in charge of continuous improvement and digital print, and Gary Nelson, marketing analyst. “We run a flat organization, and we’re not big on titles,” quips Vicks. “Some titles I just make up.”

Vicks also relies on local professionals to help steer the business. “Vicks works with NBT for operating cash and for [purchasing] equipment … For legal advice in the area of human resources, we turn to Nick Fiorenza [Ferrara, Fiorenza, Larrison, Barrett, & Reitz, P.C. in DeWitt] and for corporate law we use Peter Rayhill [Martin & Rayhill, P.C. — Utica] … Our accountant is Mike Fitzgerald [from Fitzgerald, DePietro & Wojnas, CPAs, P.C.] in Utica,” says Vicks.

Vicks notes that his business is in a continuous state of change. “I would like to do [long-term] strategic planning,” says the MBA graduate from the Johnson School of Management at Cornell. “Three years would be my goal, but in reality, I plan for only one year because things move so fast. It’s not clear where the industry is going, since the introduction of electronic readers like the Kindle … So far, educational products, particularly in the music industry, have continued [to be produced] in print form, but the pace of change is so dramatic it’s unclear where things are headed … Our strategic challenges also include finding young people as employees … Unfortunately, our industry does not attract them … [And of course], we are always concerned with our major competitors who are the 20 largest book publishers, mostly located in the Midwest … Perhaps our biggest challenge is to find more niche customers.”

“Today, digital and offset book manufacturing still represent more than 85 percent of our revenues with fulfillment at 10 [percent] and content management at less than five [percent] … I think that our future growth will come in the fulfillment and content-management areas,” says Vicks. “Currently, our revenues from exporting are less than 10 percent … I think this is another growth area for us.”

Dwight Vicks III, 50, joined the company in 1991 after working in New York City at the Bank of New York. “I became president of Vicks around 2000,” he says. “My father [Dwight, Jr.] joined the firm in 1957 after graduating from Cornell, serving in the navy, and returning to Cornell for his MBA. … Dwight, Sr. founded the company 1918 when he and his brother bought the internal print shop of a large textile mill.”

After 95 years in business, Vicks, Inc. continues to adapt to change. “We have to listen to our customers and continue to invest in digital technology … We’re not putting our money into iron anymore but into software ... We lease our digital presses to keep up with the upgrades and changes … Our sales representatives are no longer sales people but consultants who need to help our customers run their businesses better … We have to be sure our transaction costs are low so we can compete,” says Vicks III.

This is the plan to take the company to the century mark and perhaps to the fourth generation.