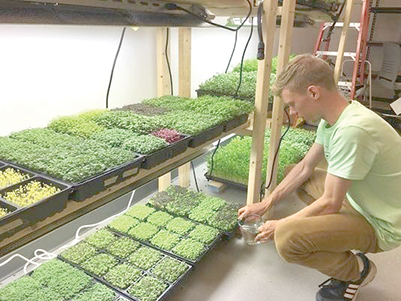 BINGHAMTON — Up until a few months ago, Remlik’s Grille & Oyster Bar, an upscale seafood restaurant in downtown Binghamton, had a problem. The tiny plants that chefs were using as garnishes kept perishing quickly. And they were entirely too expensive.

Rigoroso approached the restaurant and gave its owners a small sample of his microgreens. Remlik’s immediately ditched its previous supplier.

“After putting the greens to use, they seemed to hold up without dying,” Kelley Wesoloski, one of the owners of Remlik’s, tells CNYBJ. “And these were cheaper and better.”

Infiniti Greens is barely a year old, but Rigoroso’s microgreen business is already beginning to establish a foothold in the Binghamton market. Rigoroso, a current student at Binghamton University, is contacting local restaurants such as Remlik’s and convincing them one by one to become customers. In just a few months, he has landed six local restaurants as customers placing regular orders.

Rigoroso is capitalizing on two growing food-industry trends: urban farming and a demand for locally sourced food. Rigoroso grows the microgreens, which are small vegetables or herbs left to grow for just one or two weeks, by himself at the Koffman Southern Tier Incubator, at 120 Hawley St. in Binghamton. The greens sit on shelves stacked on top of each other inside a lab under grow lights. He then delivers the microgreens to local restaurants that serve them on their menus.

“Because those movements are starting to grow, I think I’m getting in at a good time,” Rigoroso says.

Recently, restaurants have begun to use microgreens as trendy garnishes for their color, texture, and added flavor. Bon Appétit magazine proclaimed in 2013 the tiny plants were the trendy garnishes of the moment, popping up on plates of many of the magazine’s best restaurants list that year.

“Every entree on the menu, including our sushi, uses microgreens as garnishes,” Wesoloski says.

The business currently has one employee — Rigoroso himself, who is the founder, CEO, accountant, and delivery person. He is a senior at Binghamton University, majoring in business management with a minor in environmental studies. When he is not in school, he spends the rest of his time biking from his apartment in downtown Binghamton to the Southern Tier Incubator, where he will run the business for at least the next year. The new $19 million incubator encompasses 35,000 square feet of offices, high-tech labs, wet labs, dry labs, common areas, and co-working spaces to encourage collaboration between companies. It was built to provide a “supportive environment for entrepreneurs and startup companies,” according to Binghamton University.

How he got started

Rigoroso, who hails from Long Island, started growing microgreens for his own personal use in January 2016 after he watched YouTube videos about urban farming. Rigoroso is a self-described “garden nerd” and the microgreens were an attempt at living sustainably by growing everything he eats himself.

“I wanted to stay away from the supermarkets,” Rigoroso says. “That food is expensive and I really didn’t know where greens were coming from.”

Soon after he started growing, Rigoroso’s friends began clamoring for his microgreens, which made him think he could turn his small urban farm into a business.

He has since won an entrepreneurship competition at Binghamton University. In July of this year, Infiniti Greens was accepted into the Southern Tier Incubator, which opened in June. And in October, the company was featured in “Made in Broome,” a public-relations campaign started by The Agency, a prominent economic development organization in Broome County, meant to highlight local businesses.

Even as other students leave the state following graduation, Rigoroso intends to stay in Binghamton and work on Infiniti Greens full time after he completes his studies in May 2018, keeping Infiniti Greens local. Eventually, Rigoroso would like to own a greenhouse in the area as a permanent location for the business.

“I love the community here, you can really get to know everyone,” says Rigoroso. “A big part of this is benefiting the community.”

Most of Infiniti Greens’ revenue comes from local restaurants with weekly orders. In total, Rigoroso has six regular customers, including Burger Mondays, The Colonial, Food Fusion Bar & Grill, P.S. Restaurant, and Nezuntoz Café, in addition to a few restaurants that place sporadic orders.

So far, the business has paid for itself. Because Rigoroso doesn’t have student loans to pay off, he does not pay himself. He reinvests all revenue back into the business. So far, he has generated about $1,000 in revenue.

Going forward, Rigoroso plans to grow the business by increasing his customer base of local eateries and expanding into additional retail locations. He does not want to take on investors, although he says he is confident he could raise a significant sum of money. Instead, he wants to grow the business “slowly but surely” — and by himself.