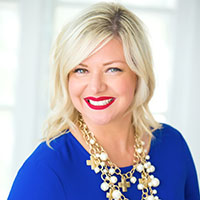 Turchetti had previously been serving as the organization’s chief administrative officer, the company tells CNYBJ in an email.

The Rochester–based and woman-owned HCR Home Care has a Central New York office at the Thruway Office Building at 290 Elwood Davis Road in the town of Salina.

In her new role, Turchetti is responsible for all non-clinical administrative operations, including human resources, contracts, corporate compliance, communications and public relations, and information technologies. She joined the company in 2005.

“I am delighted to announce Suzanne Turchetti’s promotion to company president,” Louise Woerner, founder and CEO of HCR Home Care, said in a release. “Suzanne has risen through the ranks and excelled in every role she has held because of her vast knowledge of the company, her hard work, her unique skills, and her ability to collaborate with company leadership and staff. Having worked side by side with Suzanne for nearly two decades, I know that she is supremely qualified to take on this new role and to help lead HCR into the future.”

Besides her work duties, Turchetti serves on the board of directors of Home Care Association of NY State and is a member of the Home Care 100’s Intelligence group that works to “drive exceptional performance for home health and hospice providers,” HCR Home Care said. She also serves as corporate secretary for HCR Cares and as a director and executive committee member of Dress for Success Rochester.

A resident of Irondequoit, Turchetti earned a bachelor’s degree from Siena College.

Founded in 1978, HCR Home Care is a provider of home health services for individuals, physicians, and other health-care professionals across New York. HCR operates in 25 counties across the Central New York, Finger Lakes, North Country, and Catskill regions.