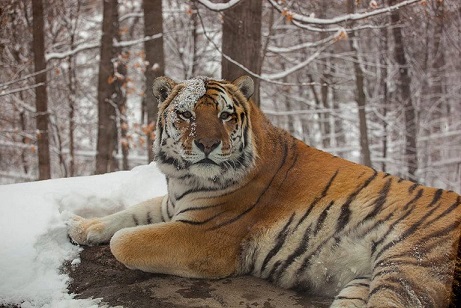 SYRACUSE, N.Y. — Toma, a male Amur tiger at the Rosamond Gifford Zoo, has died at age 18, the zoo announced Tuesday in a Facebook post.

Toma is survived by his mate, Tatiana, a nearly 20-year-old Amur tiger. The pair had triplet cubs at the zoo in 2011 as part of the species survival plan for their “critically endangered species,” according to the Facebook post. The three cubs were sent to zoos in South Dakota, Wisconsin, and Iowa, respectively, as part of the plan.

On Wednesday, Sept. 18, Toma showed increasing signs of severe abdominal pain, according to the zoo. A veterinary team from the Cornell University College of Veterinary Medicine that practices at the zoo was quickly mobilized, anesthetizing and examining the tiger. Test results suggested peritonitis and a perforation of the GI tract, according to the Facebook post. Due to the severity of his condition, zoo animal-care specialists and the Cornell vet team decided to “humanely euthanize him.”

Results from a necropsy confirmed that Toma had “a perforation of the small intestine directly associated with a large mass suspected to be cancer,” the zoo said.

Formerly called Siberian tigers, Amur tigers once ranged throughout Siberia but now inhabit only the Amur River basin in Far East Russia, the zoo explained. The largest species of wild cat, their population has been “decimated by human poaching and habitat loss,” leaving fewer than 400 of the tigers estimated to remain in the wild.

Ted Fox, Rosamond Gifford Zoo director, said the zoo will acquire another pair of Amur tigers and continue to participate in the species survival plan in the future.