Tim Birnie: Steering the company to success through diversification 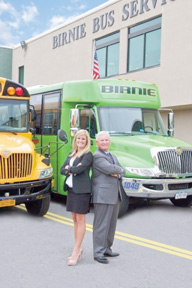 ROME — “All you men want to do is talk about buses,” Timothy (Tim) Claude Birnie remembers his mother saying. Birnie is the president of Birnie Bus Service, Inc. with headquarters located at 248 Otis St. at the Griffiss Business & Technology Park in Rome.

“My father, Martin K. Birnie, joined his brother-in-law [Martin J. Nunn] in 1947 to run a small transportation company that had one motor coach, two school buses, and a station wagon. He bought the bus [operation] in 1953 and incorporated in 1960 as Birnie Bus Service … My mother was right; all the family talked about were buses,” says the current president.

After 10 years of teaching public school, Tim Birnie joined the bus company in 1979. At that point, the fleet had 55 buses, mostly transporting children to school. “When I joined the company, we only had one contract with the Rome School District. Over the past 33 years, our fleet has grown to more than 1,200 vehicles,” Birnie says. “School buses now represent [only] 60 percent of our revenues. We also transport handicapped adults, which is another 20 percent. The transit and motor coach divisions each generate 10 percent.”

Birnie Bus is also certified by the U.S. Department of Defense to transport military personnel, and the company is affiliated with the Trailways Transportation System, a national carrier comprised of about 80 independent bus companies.

“People don’t realize that we are the 12th largest, privately owned bus company in the country,” Birnie notes. “We have 18 locations in New York and with the recent contract for Jacksonville [Florida], Birnie is probably now the 10th largest company, … transporting 100,000 passengers every day. The company has 1,482 employees [of whom] two-thirds are part-time.” Birnie declined to disclose the company’s annual revenue, but confirmed it is well north of $50 million.

“The Rome site contains 22 acres, so there is plenty of room for expansion. The headquarters building, which is owned by the company, is about 60,000 square feet and was a former vehicle-maintenance shop at Griffiss [Air Force Base].”

Birnie Bus’ growth has come through diversification. While expanding the traditional school-bus service, Bernie Bus also was granted rights in 1982 by the Interstate Commerce Commission to transport groups and tours anywhere in the United States. In 1988, the company started a handicapped-transportation program for the Rome Developmental Center, under the auspices of the New York State Office for People with Developmental Disabilities, and in 2008, Birnie Bus announced its affiliation with Trailways. “Our growth over the years has been 50 percent organic and 50 percent through acquisitions,” says Birnie. “Today, we now have such a large repair, parts, and paint facility that we fix and paint buses as well as sell parts not just for ourselves but also for school districts [that own their own buses] and for other bus companies.”

The diversification has also created a complicated table of organization and myriad corporations. Birnie Bus Service, which is structured as a C-corporation, has a number of sister corporations including Birnie Bus Tours, Inc.; T&K Real Estate; Birnie Transport Service, Inc. in Corning; Reliable Bus Parts, Inc.; and Arthur F. Mulligan, Inc., near Kingston.

Birnie Bus has grown so large that its competition to transport school and handicapped passengers is now large national and international companies. Birnie Bus competes for contracts with firms such as First Student, Inc., which has 54,000 buses operating in 38 states and nine Canadian provinces; the National Express Corporation, which operates more than 17,000 school buses in 30 states; and Student Transportation Inc. (NASDAQ: STB), with more than 9,000 vehicles serving more than 200 school districts.

At age 65, Tim Birnie is not slowing down. “I have a passion for this business,” says Birnie, who maintains his license to drive a bus. “I am very optimistic about the future growth of the company … 60 percent of the [school] districts still own their buses … As school budgets grow tighter, more are realizing they can save money by outsourcing their transportation and still deliver quality service … I think more school districts are looking favorably at privatization so they can focus on what they do best — educating the children.” While not revealing any details, Birnie is positioning the company to ride what he sees as a growing trend.

To accomplish his vision of continued growth, Birnie is focusing on the question of succession. “I have twin daughters and a son who have grown up listening to my passion for the company. Lauren is working for JPMorgan [Chase] and her sister Kait is currently working in the fashion industry. Both are getting outside experience, which I think is important. The girls have worked summers and while they were in college at the company. My son is still a teenager in high school,” Birnie says.

Birnie Bus works with local vendors for key services. “Our lead bank to finance operations, buy buses, and fund real estate in New York is NBT. When we did the Jacksonville contract, which was a $20 million project, we worked with Wells Fargo and SunTrust. For our legal work, we use Bond, Schoeneck & King for labor issues and the Matt Law Firm, PLLC in Utica, which is of counsel to Hiscock & Barclay. For accounting, we work with Mike Fitzgerald [Fitzgerald, DePietro & Wojnas CPAs, P.C.],” says the company president.

“Birnie Bus is also active in the local community. The company has been a sponsor of the Utica Boilermaker Road Race, Special Olympics New York, the Heart Run & Walk, the Kennedy Arena, Stuff the Bus, Rome Hospital Tree of Lights Festival, and the Rome Clean and Green Initiative, to name a few,” says Birnie … We’re part of this community, and it’s important to be civic-minded.”

“I was born into this business,” avers Birnie. “I have long had a vision to create a company where there is mutual respect, … a company with just compensation, benefits, and work atmosphere so employees enjoy coming to work … We [need] to treat our customers with respect, good service, and [fair] pricing … We can grow our business within our core concept of safe, reliable transportation, create a stable environment while still taking advantage of opportunities, and creating diversification around [our] core business.”

Birnie thinks back nostalgically to his mother’s comment about the Birnie men only talking about buses. “My children hear the same thing growing up [I heard],” says Birnie. He hopes to hand over to the third generation of Birnies a bus company that is growing through diversification. Judging by his current vehicle fleet, which is more than 20 times larger than when he started at Birnie Bus, and his passion for the business, Birnie Bus will continue to grow and compete on the national scene.

Birnie keeps an autographed photo of Jackie Gleason in his office dressed as Ralph Kramden, the 1950s TV character who drove a bus. Kramden was fond of saying “And away we go.” Birnie has adopted the phrase as he steers the company in new directions.