The history of the Syracuse Chilled Plow Company

The advent of the Syracuse Chilled Plow Company began on June 5, 1876 when Harry Wiard brought his process for making agricultural plows to Syracuse, and was hired by the Robinson Chilled Plow Company as factory superintendant. Harry came from a long line of plow makers. His paternal grandfather, Thomas Wiard, a blacksmith, made wrought-iron plow points in Geneseo, in the early 19th century. Thomas’ eldest son, and Harry’s father, William, established the first iron-plow foundry in the Candian province of Ontario, in 1820.

Harry Wiard began his plow-making career working in a relative’s plow factory down in Louisville, Kentucky in the 1850s. In 1858, Harry returned to East Avon, New York, where he joined his uncles at the plow factory established there by Thomas Wiard. Two years later, Harry partnered with his brother, George, to form their own plow business in 1860 — the Wiard Plow Company. Harry later bought out George to become the sole owner. He improved upon his plow shapes and designs, as well as the iron’s hardness and strength. Harry first moved the business from Oakfield, New York to Albion, then to Canandaigua, where he began to make the improved chilled plow in January 1876.

The plow received much attention at the Centennial International Exhibition in Philadelphia from May to November 1876. That June, Harry Wiard joined the Robinson Chilled Plow Company at South Geddes & West Fayette Streets in Syracuse. As factory superintendent, he began to make chilled plows and other agricultural implements. The first plow was finished and sold on Aug. 2, 1876. By July, 1877, Robinson Chilled Plow Company had made and sold almost 7,000 plows. Harry Wiard continued to improve the chilled plow and made other agricultural implements. He is credited with originating the method of chilling the iron, a process he called carbonized or white iron.

The chilled-iron plow got its name from the process by which the plow blade was created in the foundry. Molten iron was poured into molds filled with sand, which had been imprinted in the shape of an iron blade. However, before the molten iron was poured into the mold, a piece of cold steel was placed against the sand impression. When the iron made contact with the cold steel it cooled faster. Once the iron hardened, the blade was removed from the mold and allowed to further cool. This type of chilled iron was much more durable than other cast iron or steel. It was used to make plowshares, the part that cuts through the ground, dashing into rocks and roots that would break weaker metals. In 1936, the Syracuse Herald Journal newspaper boasted of the quality of the Syracuse chilled plow: “Syracuse deep-chilled iron has proved to be the most suitable material for plowing [ground permeated with rocks and roots]. It is the hardest metal used in plow construction. Not only does it wear longer than other material, but it also scours well.” One significant characteristic of the chilled-iron plow was its resistance to rusting. While steel plow blades became rusty and pitted, the chilled-iron blade could be exposed to the extremes of weather for several months without becoming damaged. 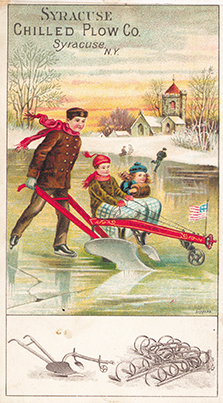 Once the iron blades were sufficiently cooled, the working parts were ground to a finely polished surface. Then, company employees attached the polished blades to other parts of the plow on the assembly line. Quality-control personnel checked the entire plow for any defects, and if they discovered any, sent the whole plow back for reassembly. Once deemed free of any imperfections, the plow was painted. Hoisted onto cranes attached to a track system, the plows were dipped into large vats of red, yellow, or green paint. Workers wiped off the parts that should not remain painted and allowed the plow to dry. Once dry, the plow was varnished and stored in a warehouse until it was sold.

In September 1877, John S. Robinson, owner of Robinson Chilled Plow Company, dissolved his association with the company. Almost two years later, in January 1879, the company was incorporated as Syracuse Chilled Plow Company. The business purchased additional property at the corner of Wyoming & Marcellus Streets from C.C. Bradley, another local agricultural implement company, named for Christopher Columbus Bradley, in July 1881, and opened a new office at that location.

For the Columbian Exposition held in Chicago in 1893, officials asked the Syracuse Chilled Plow Company to make a unique plow to display at the fair. Company administrators decided to plate a plow with gold, but could not find a plating company willing to undertake the project. Plating companies thought the gold would exfoliate from the iron. Eventually, the Toothill Plating and Art Metal Works in Rochester agreed to plate a plow if it were first constructed of brass. Plating the brass plow cost $3,000 (over $85,000 in 2019 dollars). After the Columbian Exposition closed on Oct. 30, 1893, the gold-plated plow traveled to Europe, Africa, and South America, before making another American appearance at the New York World’s Fair in 1939.

Syracuse Chilled Plow Company enjoyed great manufacturing success during the late 19th and early 20th centuries. The New York Industrial Recorder for 1898 described the company’s achievement thusly, “Syracuse is the seat of such colossal industries as that of the Syracuse Chilled Plow Company whose manufacturing plant is one of the largest and most prosperous of any in the city. The plant covers two entire blocks in the heart of the city and contains a floor space of between 10 and 12 acres and steady employment is given to from 300 to 400 skilled hands.”

In the 1890s, the company made a variety of implements to turn the earth on level surfaces and hillsides, including sulky, walking, swivel, and shovel plows; harrows; cultivators; and road scrapers. Financial figures from 1900 to 1914 illustrated that the company steadily increased its gross sales (from $708,000 to $1.1 million) and net profit (from $50,400 to $73,000). In the early 20th century, the company’s manufacturing numbers peaked at more than 100,000 implements per year, sold to American farmers and to those around the world. Company slogans included “Syracuse Plows - Best on Earth” and “The Sun Never Sets on a Syracuse Plow.”

Agricultural implement production remained strong at Syracuse Chilled Plow Company throughout the first half of the 20th century and the factory had the reputation of making one of the best, if not the best plow on the market. The company’s footprint increased from two to three city blocks and from 12-15 acres. About 10,000 sales agencies sold the equipment around the world. The company prided itself on its employee-benefits package, which included sick time, paid vacation, and other amenities, along with an employee-owned camp in Baldwinsville. Some members of local families spent their entire careers working for Syracuse Chilled Plow Company, often continuing from one generation to the next.

However, the sprawling plow factory was showing its age by the early 1950s. The age of the buildings and equipment from one of the oldest continuous manufacturing plants in Syracuse, combined with the diminishing need for horse-drawn plows, and the market for other products shifting to the middle and far west, led Deere & Company executives to come to the inevitable decision to close their Syracuse factory in 1955. Company executives stated that the buildings were out of date and inadequate for making existing and future lines of equipment. One building dated back to 1860 and the manufacturing equipment was at least 50 years old. Executives praised the employees for their quality workmanship and provided severance pay equal to their years of service; some employees received as much as $3,770 (equivalent to $35,450 in 2019 dollars) when the plant closed.

In 1959, William Delevan, Sr. purchased the former Syracuse Chilled Plow Company factory and converted it into a multi-tenant complex that became known as the Delevan Center. His son, William, Jr., assumed management of the complex in 1971 and still manages it today. He has retained the multi-use function of the original Delevan Center, and today the former plow factory offers space to artists and office space for businesses.

The Onondaga Historical Association has a Syracuse chilled plow in its collection, along with trade cards and catalogs, and other company ephemera.

Thomas Hunter is the curator of collections at the Onondaga Historical Association (OHA) (www.cnyhistory.org), located at 321 Montgomery St. in Syracuse.