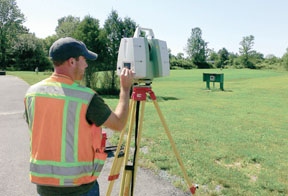 ENDWELL — New technology that earned Delta Engineers, Architects & Land Surveyors, P.C. a slew of awards and boosts the efficiency and quality of survey and mapping work at the firm, is driving growth at the Endwell–based business.

“That’s pretty exciting for us,” Bruce Snyder, head of Delta’s Survey & Mapping Group, says of the awards. Not only did Delta take home high honors, but it was also the first time a single firm won multiple awards at the same conference, he notes.

Those awards follow on the heels of honors earned in January at the New York State Association of Professional Land Surveyors “Surveyors Got Talent” Map Contest, where Delta won first place in five out of eight categories.

Delta purchased the scanners (the firm owns two) three years ago and spent the first year really just learning how to use them, he says. The second year, the firm really put the scanners to work, and now, in the third year, uses them for about 80 percent of the survey and mapping group’s work. Scanner projects include bridges, roads, buildings, and properties, Snyder says.

The benefits of the scanners are numerous and directly boost both the speed and efficiency with which Delta can turn around a project and provide useful data and maps to its clients, he says.

With traditional surveying methods, a good surveying team could obtain about 1,500 data points in a day while the laser scanner is able to scan 50,000 points in a second, Snyder says. That means projects that used to take days now take hours and contain more data and detailed information.

So far, business has been picking up this year, particularly as Delta markets the laser scanning to other architects, engineers, and surveyors that don’t have the technology, Snyder says. As a result, the Survey & Mapping Group, which is headquartered in Vernon, added a new employee to bring its total number of employees to 10. Snyder adds that the firm hopes to add a survey and mapping group at the Endwell office in the near future.

The group travels across New York for jobs and has also ventured into Pennsylvania, where it just completed a job at Penn State University, scanning a new ice rink to check for levelness.

“Every week, we’re finding another opportunity we can use [the scanner] for,” Snyder says.

Growth in Delta’s Survey & Mapping Group matches overall growth at the firm, which is off to a good start for 2013, says James McDuffee, vice president and COO of Delta Engineers, Architects & Land Surveyors.

“We are seeing activity and growth back in private development,” he says. “There’s work at the state level on a lot of state facilities.” Both are encouraging signs, McDuffee adds.

As a result in the increased work, Delta’s staff has increased 10 percent over the past year to 112 employees in order to keep up with the increased number of projects, he says. He credits the increased workload to several factors, including the improved economy. “We have a pretty aggressive marketing program,” he notes. “We find that we are also chasing more projects than we used to and winning more.” The vast majority of Delta’s work consists of repeat business from previous clients, McDuffee says.

One of Delta’s notable current projects is the design work for new dorms to be built at Broome Community College.