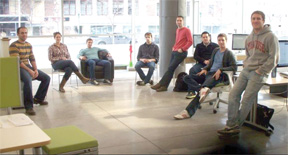 Rounded Development moved into the facility’s 1,600-square-foot anchor space in February. The firm, which specializes in app and Web development, was formed from businesses that grew up in the Tech Garden.

AppFury, founded in 2009, and Rounded Development, launched in 2011, were neighbors in the facility and eventually began collaborating on projects. The two firms started to overlap in their work so much, it simply made sense to join forces, says Eric Hinman, partner at Rounded Development and co-founder of AppFury.

“We had been working together for nine months,” says Andrew Farah, also a partner at Rounded. “It was almost like dating. And then after that, it was let’s do this.”

Farah was a co-founder and director of operations at Rounded and also previously served as chief technology officer at AppFury.

The merger is still in the process of closing, Hinman adds, and should wrap up later this month. The firms decided to use Rounded’s name since it indicates a broader focus than AppFury, although AppFury will remain a brand underneath Rounded, he says.

Long term, Hinman says traditional client work will provide the smallest piece of Rounded’s revenue. The company expects to generate far more business with its own products and through partnerships it develops with clients.

Before the merger, for example, AppFury and Rounded worked together to develop a virtual business card platform. Through a QR code printed on a traditional business card, users can easily download information about each other’s companies and connect
on social networks.

Syracuse–based Dupli, a local printing company, is now selling the platform as one of its products, Hinman says.

Rounded is also partnering with Mirbeau Inn and Spa of Skaneateles to develop an iPad-based menu for its steakhouse and wine
bar. The idea is to eventually sell the system to others in the hospitality business, Hinman says.

The company has worked frequently with younger companies for a stake in a product rather than all cash, Farah says.

The goal is for the company to spend most of its time on its own products and in partnerships. That work will be supported by a base of ongoing work with three to five larger clients, Farah says.

Some Rounded clients include CenterState CEO; PPC of DeWitt, a manufacturer of connectors used in telecommunications; and the Woodbine Group, a Syracuse–based real estate developer.

Rounded employs nine people, four from AppFury and five from Rounded, along with several project-based contractors. Farah says the company hopes to add another two people this summer.

The Tech Garden anchor space the company occupies was formerly home to Visory Group, an information-technology firm. Visory merged in May with Integrity Networking Systems of Fairport to form IV4, Inc.