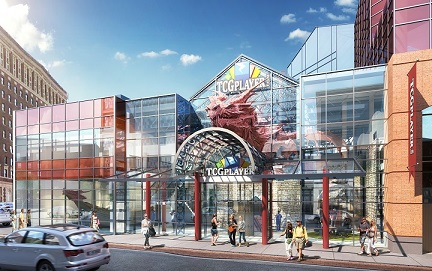 SYRACUSE, N.Y. — TCGPlayer.com, the online company that helps collectors and dealers around the world buy and trade game cards, has unveiled the look for its new headquarters in The Galleries of Syracuse downtown.

Company Founder and CEO Chedy Hampson shared artists’ renderings of the renovations to space on the South Warren Street side of The Galleries. He expects the growing 230-employee business to move into the new space in November.

The entrance to TCGPlayer’s 44,000 square feet will be topped by a dragon statue and the entrance lobby will have a castle theme, complete with turrets.

Those walking along the streets will see be able to look in at three themed rooms. One will be themed for “Star Wars,” another for the “Harry Potter” stories, and the third will feature a “Mario Bros.” theme.

“They’re all appliques,” Hampson explains, making possible for the work to be completed in just four months. The Harry Potter-themed room will include “portraits” that are actually television screens displaying moving images of TCGPlayer employees dressed in Harry Potter-style outfits, Hampson says.

Introducing the plans before a crowd that included economic-development officials, Syracuse Mayor Ben Walsh, and company employees, Hampson traced the company back to his days of working, and loving his job, at Twilight Comic Book and Game on North Salina Street.

Four years ago, he reminded his listeners, TCGPlayer was made up of only 14 people.

The company has committed to providing more than 300 new and retained jobs in the region in the next five years, according to a release from the state that come out after the announcement.

TCGPlayer’s growth has drawn support from the state, the release noted. In 2016, $50,000 in funding was made available to TCGplayer from the CNY Rising Upstate Revitalization Initiative, as well as $300,000 in performance-based Excelsior Jobs Program tax credits.

“Due to the company’s exponential growth, TCGplayer is now eligible for up to $2.4 million through the Excelsior Program and up to $550,000 will also be provided to the business through a Central New York Regional Council Capital Grant, tied to job creation commitments,” the release said.

The state estimated the cost of renovations at more than $3.3 million.