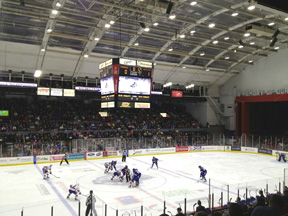 SYRACUSE — Syracuse Crunch fans may have noticed something new, bright, and flashy if they have attended any games in the new hockey season.

Ephesus installed the new LED system at the War Memorial prior to the 2012-13 season and has upgraded the lights for the 2013-14 campaign.

Ephesus specializes in LED lighting, providing light systems that are brighter and more efficient than their traditional counterparts such as metal halide lighting, says Joseph Casper, president of Ephesus. The firm’s systems can save clients as much as 60 percent to 70 percent over the cost of traditional lighting, while also allowing clients to up the entertainment value of their venues through the lighting, he contends.

“That’s the really cool thing, the entertainment aspect of it,” Casper notes. With old lighting systems, turning the lights on was a minutes-long process as switches were thrown and bulbs warmed up. That’s not the case with LED, he says, where lights can be turned on and off instantaneously and wirelessly. The lights can strobe, be used as a spotlight, and even include colors, making it more fun for fans, Casper says.

Ephesus’ money-saving and attention-grabbing lighting system is gaining notice from more than just spectators, he adds. A little over a year after completing its first install at the War Memorial, the company is now wrapping up its sixth arena project with several more projects on tap for the fourth quarter of this year and the first quarter of 2014.

The firm’s number of customers and projects has more than quadrupled, Casper says. Ephesus added five new employees this year, bringing its total to 14 people.

Casper credits the company’s success to several different factors, but notes that the lights really speak for themselves. He has taken many prospective clients into the War Memorial to show off the lights and walked out of the building with a new client in his roster. Other projects that Ephesus has completed include the Broome County Veterans Memorial Arena in Binghamton and the Webster Bank Arena in Bridgeport. Conn. The company’s most recent project is the Rioch Coliseum in Toronto. While the company does some marketing outreach, Casper says, as word spreads about Ephesus’ lights, arena operators are seeking the company out.

Another key to the firm’s success and ability to sell its system is its approach to lighting from an engineering background, Casper says. He has 25 years of experience in the semiconductor industry and has used that know how to help design the LED systems.

LEDs are solid-state semiconductors that started to take off as a lighting option around 2007, he says. Unlike more traditional lighting, no gas or filaments are involved. “It’s basically indestructible,” Casper says. With little to no maintenance requirements or costs, a lifespan of decades, the ability to operate at extreme hot and cold temperatures, and the ability to withstand a 100-mile-per-hour hit from a hockey puck, LED lights just make good sense for arenas that play host to sporting events.

That has been Ephesus’ primary target market to date, Casper says, and there are plenty of arenas out there to keep the company busy for a while. However, he’s not content to stop there, and Casper says his firm is already developing a comparable system for outdoor stadiums as well. The LED lighting market is a roughly $70 billion industry, but with little emphasis placed on the arena and stadium markets where Ephesus is carving its niche, he contends. That’s why the company plans to continue to strike while the iron is hot and competition is minimal. Casper is working now to get a foot in the door with the National Hockey League as well as Major League Baseball to provide lighting at venues that host those teams.

Ephesus (www.ephesuslighting.com), founded in 2010, also provides commercial and industrial LED lighting. The company worked with a number of New York universities to hone its technology including Syracuse University, Binghamton University, Rochester Institute of Technology, and Cornell University. The company also works in partnership with several other New York companies, such as Anaren, Inc. (NASDAQ: ANEN), which provides wireless technology, and Ansen Corp. in Ogdensburg, which does all the manufacturing.