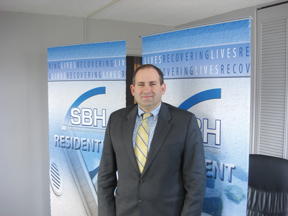 SYRACUSE  — Syracuse Behavioral Healthcare (SBH) has acquired the Learbury Centre at 329 N. Salina St. in a deal that closed March 21.

The purchase gives SBH, which provides treatment and rehabilitation services for people with drug and alcohol addictions, a new home for its Syracuse outpatient clinic. And in 2013 the nonprofit organization plans to relocate its administrative headquarters to the newly acquired building.

“This anchors SBH in downtown Syracuse,” says Jeremy Klemanski, the organization’s president and CEO. “It’s only two blocks from [St. Joseph’s Hospital Health Center], which is a great partner in behavioral health services.”

SBH paid $2.83 million to acquire the 55,000-square-foot Learbury Centre from Pietrafesa LLC. It also plans about $1.2 million in renovations that will turn part of the building into an integrated substance-use disorder and mental-health clinic for outpatients.

Syracuse–based Hueber-Breuer Con-struction Co., Inc. will be the contractor for the renovations, which include new roofing, new windows, and a renovated interior for SBH’s relocated clinic. Associated Architects of Syracuse is the architect.

The work is slated to start in late spring or early summer and will transform 17,000 square feet of space in the Learbury Centre into the outpatient clinic. Renovations on the space, which is the former home of Jacobsen Rugs, should be complete in time for the clinic to move in by the fall of 2012, Klemanski says.

Patients will enter and exit the clinic through an entrance that is separate from the rest of the Learbury Centre, according to Klemanski. Parking for patients will be in the back of the building, he adds.

“The front of this building’s operation will remain for tenants,” Klemanski says.

Empower plans to leave the building in 2013, according to Klemanski. In the summer or fall of that year, after the credit union moves out, SBH will relocate its administrative offices and residential-services offices into the vacated space.

Those offices currently take up 10,500 square feet in the Regency Tower at 770 James St. The offices are scattered throughout the tower, while the Learbury Centre offers contiguous space, according to Klemanski.

“We currently occupy several suites,” he says. “While the Regency Tower has been good about trying to accommodate us, having people spread all over the place is just not efficient.”

The organization, which operates in Rochester as well as Syracuse, served 5,423 people last year. SBH is growing as more people seek help for substance-abuse problems, according to Klemanski.

“The biggest driver we’re seeing is it’s becoming more socially acceptable to reach out for help,” he says.

However, the building was up for sale when Robert Pietrafesa was still alive, according to McDermott.

“It was time for them to sell,” McDermott says.

Opening the outpatient clinic in the Learbury Centre sets up a chain of SBH moves scheduled to play out over the year. The first of those moves is the expansion of the clinic itself.

SBH is relocating its outpatient operations from a building it owns at 847 James St. The clinic currently has 10,500 square feet in that building, meaning it will gain about 6,500 square feet with the relocation to the Learbury Centre.

That gives SBH enough space to hire more mental-health counselors, Klemanski says. The organization plans to hire 11 new staff members to work with patients as well as three to five clerical workers. That is on top of the 45 workers who currently work at the clinic — although Klemanski says only about 30 of those employees are at the clinic at one time.

The new mental-health counselors will be important because about 68 percent of SBH’s outpatient population needs treatment for both mental-health and substance-abuse issues, Klemanski says. The clinic will save patients from having to coordinate with different care managers in different locations because it will be able to address both sets of needs, he adds.

“To be able to do it in one setting is really where the future of behavioral health care is going,” Klemanski says.

The larger space will also give SBH the ability to see more outpatients, according to Klemanski. It currently has about 400 outpatients, and that number could increase slowly to 500. Between 10 percent and 25 percent of outpatients it sees come to the clinic every day, Klemanski estimates.

After moving outpatient operations from 847 James St., SBH will be able to consolidate its Syracuse inpatient operations in that building, which is 27,400 square feet. The building already holds the 40-bed Willows Inpatient Rehabilitation center.

The Willows will be joined at 847 James St. by a detoxification center. The detoxification center is moving from 714 Hickory St. and will expand from 18 beds to 25 beds with that relocation. It will also likely add four or five staff members, although the number of new hires has not been finalized, according to Klemanski.

“The detoxification and stabilization beds will be in the same site as the inpatient rehabilitation beds,” he says. “All of the inpatient medical staff — doctors, nurses, food-service staff — will no longer have to travel between buildings.”

Some renovations will be needed to prepare the building at 847 James St. for detoxification beds. Showers will be added to bathrooms in the building, and counseling offices will be converted to bedrooms. Other work includes changing a child-care area to a physical-fitness space and converting a waiting area into a family visitation space.

SBH has not selected a contractor for that work or established cost estimates. Associated Architects of Syracuse is the architect for the project, Klemanski says.

All work will be complete at 847 James St. and the detoxification center will move in by mid fall, Klemanski says.

“Renovations are relatively minor in that building,” he says. “They’re mostly aesthetic, with the exception of adding the bathrooms.”

Finally, SBH will convert the space at 714 Hickory St. vacated by the detoxification center to four supportive-living apartments. The apartments will be for people who were homeless or had experienced substance-abuse or mental-health issues in the past, according to Klemanski.

The four new apartments will give SBH a total of 13 units in a block it operates between 714 and 720 Hickory St.

“It returns back to more of its neighborhood setting,” Klemanski says. “You walk down the block, that’s a residential neighborhood, Hickory Street.”

The apartment conversions should be complete by January 2013, according to Klemanski.

“Our plan is that by Jan.1, everybody is in their new home and up and fully running,” he says.