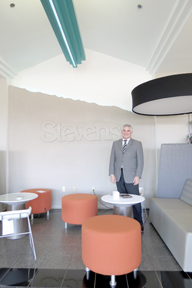 SYRACUSE  —  The owners of Stevens Office Interiors have decided their headquarters has a little too much elbow room.

“We don’t need as much space,” says Thomas Maugeri, president and co-owner of Stevens. “It’s pretty vast here. When you have too big a facility, it gets too confusing.”

Maugeri and his co-owner, Stevens vice president Pat Lewis, decided to shrink the office-furniture dealer’s footprint after the idea spent several years on the table. They want to go from the current company-owned 25,000-square-foot facility at 1449 Erie Boulevard East in Syracuse to about 15,000 square feet.

Such a move would cut the company’s showroom from 15,000 square feet to 7,000 or 8,000 square feet. It would also help the business save on overhead costs like utilities, Maugeri says.

Syracuse–based Pemco Group Inc. is providing brokerage services for Stevens Office Interiors as it searches for potential relocation destinations. The move does not need to take place by a certain date, Maugeri says.

A change in the way people shop for office furniture helped push Stevens toward cutting down its physical location, Maugeri says. Online photos and renderings allow customers to preview furniture without coming to a showroom. And a new showroom could be tailored to focus on industry trends including ergonomics, collaboration, efficient use of space, and technology, he adds.

“We can highlight the new innovations — not only furniture, but technology,” Maugeri says. “Because we do sell technology products like electronic whiteboards and scheduling systems.”

Stevens Office Interiors will not be eliminating workers when it shrinks its footprint. The company has 30 employees, Maugeri says. Its employment levels will remain steady unless the economy improves, at which point it would add staff members, he continues.

Maugeri declines to share revenue totals for his company. He also declines to predict revenue growth in the next year.

If Stevens does relocate, Maugeri wants to move to a space that’s to the north of Erie Boulevard and to the east of Teall Avenue. He would like to remain near a main thoroughfare that’s visible and easy to access. Even if showrooms don’t need to be as large as they were in the past, walk-in traffic is still important, Maugeri says.

The potential move wouldn’t be the first time Stevens slashed its showroom space. About five years ago, the company carved a transactional warehouse that handles furniture staging out of its Erie Boulevard building. That warehouse, which is about 8,000 square feet, will move with the rest of the company’s headquarters operations.

Stevens also has about 10,000 square feet of warehouse space off Bridge Street that will not be affected by the headquarters move, according to Maugeri.

“Nothing’s really changing except the building,” Maugeri says. “Whether business is OK or turning down or upturning, you should always look at what your needs are. I think you can’t afford your wants as much as you used to be able to.”