Starting a business on a bus 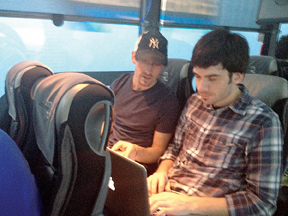 Launching a startup is hard enough, never mind doing it with complete strangers. And, on a bus with spotty Internet access, in 72 hours.

That’s exactly how Ithaca College Professor Adam Peruta spent three days in March as part of the StartupBus entrepreneurial competition. Ten different groups set off from cities around the country to spend 72 hours making their way toward the SXSW festival in Austin, Texas.

They spent the time developing new business concepts. The event closed with a pitch session at SXSW among finalists chosen over the course of the competition.

Peruta’s bus, which embarked from Washington, D.C., had about 26 people on it. He ended up working on an idea he brought to the table with just one other person. And although his idea, a system to provide live, real-time ratings of college classes, didn’t make the finals, he says the trip was worthwhile.

“I would definitely do it again,” he says. “There were so many smart people on the bus. They were some guys who could do things I just can’t wrap my head around.”

StartupBus began in 2010, apparently as a joke. The competition’s founder, Elias Bizannes, was talking with some friends about setting out on a road trip from San Francisco to SXSW and launching a startup along the way.

People thought he was serious, according to the StartupBus website. The contest began in 2010 and started expanding to other cities the following year.

The experience was appealing precisely because of the obstacles it presented, says Peruta, who first heard about the competition on Twitter. Being faced with an extremely tight deadline, working in unusual circumstances, and having the chance to meet an array of talented people seemed like a good way to spend a few days, he says.

In addition to working on their ideas, the teams stopped at a number of tech accelerators and incubators along the way to work on their pitches.

“You got to practice pitching your idea over and over again to different groups,” Peruta says. “I realize now that’s a core skill that everyone needs.”

Peruta teaches in the Department of Strategic Communication at Ithaca College. He has been at the school since 2007. He earned his bachelor’s degree in computer graphics from Syracuse University (SU) in 2000 and a master’s degree in new media from SU in 2004.

There’s an application and interview process for StartupBus, Peruta says. Participants spend some time at the start of the trip pitching each other different ideas and forming teams.

Peruta says his concept of live, real-time ratings could be applied in other ways. The competition’s judges thought a market like television might make more sense, he says.

Peruta and his partner, Jesse Hixson, plan to keep working on the concept this summer. They focused intensely on getting a working rating system up and running, Peruta says.

They were able to complete about 90 percent of a functioning app over the course of the three days, he adds. But because there were just two of them, they didn’t have as much time for promotion, marketing, or other buzz-building activities as some of the other, larger teams, Peruta says.