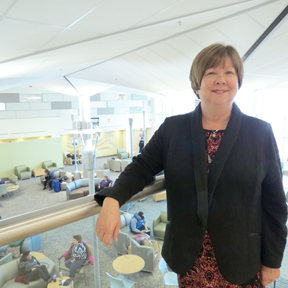 St. Joseph’s last May launched SJLinked, an electronic health-record (EHR) system across its entire organization, including the hospital, clinics, and the primary-care offices of St. Joseph’s Physicians.

The health-care organization has used electronic records since 1999, but the system-wide EHR means all providers are on the “same screen, ensuring consistency and improving coordination of care,” St. Joseph’s said in a news release in May 2014.

The system connects “everything we do,” from the primary-care office through the hospital back out to the community, says Kathryn Ruscitto, president and CEO of St. Joseph’s Hospital Health Center.

“Over time, I’m told by other CEOs they see their capture of revenue increase by almost 5 percent on an annual basis,” she says.

Ruscitto spoke with CNYBJ on Feb. 5.

The electronic records could prevent repeat tests and/or duplicating procedures in the course of a patient’s treatment.

“It improves the quality of care, has less impact on the patient, and, over time, produces better financial performance,” Ruscitto says of SJLinked.

St. Joseph’s expected to finish 2014 with annual revenue of nearly $634 million, according to information it provided for the Jan. 26 CNYBJ Progress Edition. The health-care organization is projecting revenue of more than $660 million in 2015.

SJLinked allows St. Joseph’s personnel to attribute, “without handwriting,” every aspect of a given patient’s care.

Ruscitto conceded that implementation of the new EHR system resulted in reduced productivity because “everybody has to slow down, learn the system.” She expected 2014 to be a “bumpy” year.

“Now we’re expecting to really realize the benefits going forward and every year, it’s going to have a bigger payback for us because we will have gone from hand writing, hand attributing, to everything being automated,” says Ruscitto.

The system “immediately” codes and produces the patient bill, so it’s “more accurate, less bouncing back, less audit related to it,” she adds.

Its previous software vendor informed St. Joseph’s that it was “pulling the plug” on the system, something the organization didn’t anticipate happening.

“The last thing I wanted to do was rip [up] and replace a technology system the same year we were opening a new tower, but we had no choice,” she says.

St. Joseph’s and Excellus BlueCross BlueShield, Central New York’s largest health insurer, are collaborating on an ACQA, which is short for accountable cost and quality arrangement.

An ACQA — which is designed to “achieve enhanced care coordination, improve patient satisfaction and outcomes, and reduce health-care costs” — will benefit Excellus members who are under the care of St. Joseph’s-affiliated physicians, the organizations said in a news release they issued last Aug. 27.

The organizations believe they can deliver “better” health-care quality and avoid “unnecessary” costs by “improving access to primary care medical services (to manage chronic illnesses such as diabetes and reduce the need for emergency room visits), improving medication adherence rates and limiting duplication of services,” according to the Aug. 27 news release.

The ACQA assesses quality performance through the use of national quality measures, which include performance thresholds for diabetes, blood pressure, and coronary-artery disease.

With its collaboration with Excellus, St. Joseph’s has formed a clinically integrated network (CIN) of physicians, says Ruscitto.

Physicians that currently work for the hospital are now branded as St. Joseph’s Physicians.

Ruscitto says “more and more” physicians want to be part of that network, so the hospital will “continue to offer that option.”

“But we also have a number of independent physicians who want to stay independent, so we’re joining together with them to create the clinically-integrated network [CIN],” she adds.

The clinically-integrated network involves all the physicians coming together to jointly begin to understand how to improve quality and reduce cost.

“The first product we will offer through the CIN is ACQA. [It] won’t be the only, but it will be the first,” says Ruscitto.

The group will also work to “better manage care” for the Medicaid and Medicare populations.

“It will be physicians, in a governance role, talking together and saying … why is orthopedics doing it this way and cardiac surgery doing it this way. How do we get a better common platform for how a patient moves, and when we share a patient in common, how do we do a better job?,” she adds.

As of Jan. 1, about 300 physicians had enrolled to offer the AQCA product, says Ruscitto.