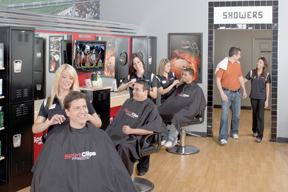 CLAY — At most hair salons, the term “highlights” refers to adding color accents to one’s locks, but at Sport Clips, highlights are also what the customer might be watching on TV while getting a haircut.

Sport Clips is a Georgetown, Texas–based company with franchised locations offering haircuts for men and boys in a sports-themed environment.

Patrons are able to watch sports on flat-screen televisions as stylists cut their hair.

The company has a location operating in a 1,600-square-foot space in COR Center, a shopping plaza at 3873 Route 31 in Clay.

“I personally have always wanted to own my own business,” says John Brecht, a Baldwinsville resident who along with his wife, Patricia, owns the local franchise of Sport Clips.

They opened the Clay Sport Clips on Jan. 11, he says.

As a sports fan, he also liked the company’s sports-themed environment and that Sport Clips doesn’t require its franchise owners to leave their jobs.

“We could continue with our careers while we build the business,” Brecht says.

Before pursuing the franchise, Brecht worked for much of his adult life as a project manager and estimator for companies that included the Suit-Kote Corp. in Cortland, DE Tarolli, Inc. in Van Buren, and most recently at AJAX Companies, LLC of Homer, where he was laid off from his position in 2012, he says.

Brecht says he is currently seeking a full-time position in the same line of work.

Brecht began looking into the idea of franchise ownership in 2011, and once he discovered Sport Clips, he signed the franchise agreement in January 2012.

Soon after, Brecht formed Jomeka Enterprises, LLC, which is now doing business as the local franchise of Sport Clips.

Sport Clips hired The Widewaters Group to help the Brechts find their space for operating the business, which had previously housed similar businesses, including a local franchise of Cost Cutters, a division of Minneapolis, Minn.–based Regis Corporation.

The company then drew up a letter of intent for the space with COR Development Co, LLC of Fayetteville. Syracuse contractor Rich & Gardner Construction Co. started work on the space in August 2012 and its effort continued through mid-October, according to Brecht.

Omaha, Neb.–based Sympateco Inc. designed the store, as it does for most Sport Clips locations, and provided the equipment for the space, he says. Brecht purchased the televisions from electronics retailer Best Buy (NYSE: BBY).

Brecht declined to disclose how much he invested to start the Clay location, but said a U.S. Small Business Administration-backed loan from College Station, Texas–based Spirit of Texas Bank provided the majority of the financing.

Sport Clips recommended Spirit of Texas Bank as a lender for the Brecht’s investment, he said.

The investment also covered the cost to prepare the space for business, he added.

He declined to offer a 2013 revenue projection for the franchise location.

Five months into the operation, Brecht is generally with pleased with the store’s progress.

“I’m very satisfied with the way things have gone so far and encouraged to hopefully open other locations in the future,” Brecht says, noting he’s still primarily focused on the initial Clay location.

To this point, most of Brecht’s efforts have been in what he called “neighborhood marketing,” including attending some local events such as the opening day of little-league baseball in Baldwinsville. Sport Clips has an inflatable, eight-foot mascot named “Sporty” that a human gets inside, which Brecht calls “an attention grabber.”

“It gives us an opportunity at that time to hopefully hand out some coupons to potential clients,” he adds.

The basic haircut, called “Varsity Haircut” for adults is $17, the “Jr. Varsity Haircut” for kids is $14, and “The MVP Experience” which includes a hot-steam towel, massaging shampoo, neck and shoulder massage, along with the haircut for $22, Brecht says.

“All new clients, when they come in for the first time, get upgraded to the MVP for free, so they can see what the experience is all about,” he adds.

And even though most of its clients are male, the Clay location has serviced females for haircuts, he says.

CEO Gordon Logan founded Sport Clips in 1993 in Georgetown, Texas, and opened its first franchised store in Houston two years later, according to entrepreneur.com, the website for the publication Entrepreneur.

The company requires a total startup investment between $177,800 and $277,000 and a franchise fee between $25,000 and $49,500. Sport Clips also requires an ongoing royalty fee of 6 percent and a five-year, renewable franchise agreement, the website says.