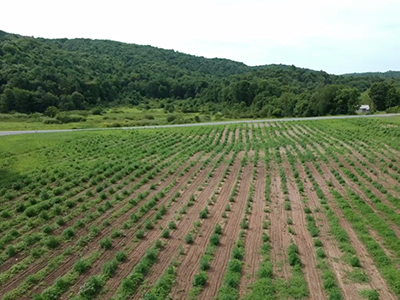 BINGHAMTON — If Michael Falcone has his way, you might just find hemp in your Christmas stocking this year.

Falcone, founder and CEO of Southern Tier Hemp, says he expects to have hemp-based lotions and tinctures on the market by late fall.

His company is part of the revival of hemp in the state and across the country.

Hemp is currently an $820 million industry in the United States, according to Assemblywoman Donna Lupardo, D–Endwell. That is despite the fact that federal law prohibits almost all hemp farming. As a result, almost all the hemp used in this country is imported, much of it from China and Canada.

Hemp is illegal to grow because it is categorized as a schedule 1 substance, the same as marijuana, to which it is closely related. That puts it in the same category as heroin, LSD, peyote, and ecstasy. The federal Drug Enforcement Agency (DEA) defines schedule 1 substances as “drugs with no currently accepted medical use and a high potential for abuse.”

But hemp has very little to none of the psychotropic compound that gives marijuana smokers a “high,” tetrahydrocannabinol, more commonly called THC.

Instead, hemp’s value is largely linked to phytocannabinoids, chemicals that some say are helpful in treating a variety of health problems. Different sources say they can help with problems including acne, anxiety, arthritis, cancer, chronic pain, depression, diabetes, inflammation, mood disorders, schizophrenia, and neurodegenerative diseases such as Alzheimer’s, according to some. Phytocannabidnoids have also been shown to stop the spread of cancer cells. The most well known is called CBD.

Responding to this, in 2014, Congress passed, and President Barack Obama signed, a farm bill that allowed experimental growing of hemp under certain conditions.

Likewise, seeing that hemp could be a large-scale crop, New York has been encouraging experimentation with the crop and, most recently with developing processes to commercialize its use.

Legislation sponsored by Lupardo that would clarify the difference between hemp and marijuana passed in the Assembly in June, but did not get a vote in the State Senate before the session ended.

Falcone, chairman and CEO of Syracuse–based Pioneer Companies, has been interested and involved in the industry for years. He and his wife, Nicole Ruvo Falcone, applied for one of the five medical marijuana licenses New York State issued in 2015.

They were not chosen, Falcone recounts, “but it did give us an opportunity to meet a lot of folks.” Among them were people from a Kentucky business called GenCanna.

Falcone was so impressed, he invested in the company and now serves on its board of directors. “In the last four years I got to see the business grow and flourish,” he says.

Falcone is applying GenCanna’s lesson to Southern Tier Hemp as the new company utilizes protocols and standards for growing and processing the crop. “Gencanna is a strategic partner,” he says.

The goal isn’t simply to grow the crop and then process it at harvest time, he explains. Southern Tier Hemp aims to stagger planting and harvesting so that the company has a “large and sustainable supply so we have CBD in the building at all times.”

Southern Tier Hemp is not alone in its interest, explains Kaelan Castetter. His company, Castetter Sustainability Group, consults with farmers and processors starting in the industry. The firm organized the Southern Tier Hemp Summit at the Koffman Southern Tier Incubator in downtown Binghamton. It drew 150 attendees, including experts, those already in the business, and local individuals looking to get their own businesses involved in the field. “It was not just hippies showing up saying, ‘I want to grow hemp!’” Castetter says.

While farmers are learning to grow hemp, processors are just now buying the equipment needed to process it. Falcone says they are starting small, having just planted the first plants in Endicott last year. “We don’t want to go out and spend money foolishly.”

Processes are similar, but not identical to handling other crops. The hemp will need to be dried, in a way similar to how tobacco is dried, Castetter says.

Extracting oil, Falcone says, will be similar to the way oils are processed from other plants, such as soybeans.

Falcone sees the industry growing rapidly in the Southern Tier and, with support from the state and local universities, being a hotbed of development. “We want this to be a center of excellence for the hemp industry.”

As for Southern Tier Hemp, “I see us in three to four years having up to 100 employees.”