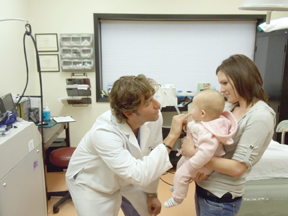 “Our move to Big Flats gives us the chance to bring our brand of care, expertise, and individual attention to the residents of the Elmira area,” Dr. Colleen Crandell, who co-owns and operates Southern Tier Dermatology & Aesthetics with Dr. Curt Fenkl, said in a news release announcing the new location.

Crandell and Fenkl began looking for a location in the Elmira area last spring due to a lack of such care in the region and requests from patients who live in that area but were visiting the Vestal office, says Stephen Donnelly, president of Dynamic Innovation Group, and the medical practice’s public-relations spokesman.

“We are so glad we’ve opened our clinic in Big Flats and have been able to make a difference already,” Fenkl said. “There’s a definite need.”

Southern Tier Dermatology & Aesthetics, headquartered at 200 Plaza Drive, Vestal, has a practice diagnosing pre-cancerous moles, particularly in teens and young adults, using dermoscopy. Dermoscopy gives visibility to the skin underneath a mole to help determine whether a biopsy should be performed. The process can help doctors detect melanoma in 65 percent to 80 percent of cases, the release said.

According to the American Cancer Society, about 76,250 people will be diagnosed with melanoma this year, and 9,180 people will die from it. Melanoma accounts for fewer than 5 percent of all skin cancers — with skin cancer being the most common of all cancers — but melanoma causes the majority of skin-cancer deaths. The risk of getting melanoma is about 1 in 50 for whites, 1 in 1,000 for African Americans, and 1 in 200 for those of Hispanic descent.

More than 2.2 million cases of basal- and squamous-cell skin cancer are diagnosed each year, according to the Cancer Society. The organization believes fewer than 2,000 people die each year of non-melanoma skin cancer, with that rate declining from year to year.

“In dermatology, you need to evaluate each patient individually and give them systemic and systematic treatment,” Fenkl said. “We at Southern Tier Dermatology & Aesthetics are very aggressive in our treatment to get them better.  It is easy to treat serious concerns in dermatology once patients are properly seen and properly diagnosed.”

Crandell and Fenkl worked with realtor Trisha Ackerman of Pyramid Brokerage to find the 1,600-square-foot office, Fenkl said. The practice spent about $200,000 to renovate the space and acquire equipment. The Big Flats office employs eight people with plans to add staff as the number of patients grows. Southern Tier Dermatology & Aesthetics currently has 25 employees companywide, including several that work at both the Vestal and Big Flats offices.

Along with the new Big Flats office, Crandell and Fenkl have plans to open an office in Utica later this year as well. Southern Tier Dermatology & Aesthetics (www.stdermatology.com) also plans to eventually expand into a new, larger building in Endwell, the release noted.

The goal with all the locations, Donnelly said, is to provide patient care, create jobs, and offer a dermatological resource for primary-care physicians to which they can refer patients.