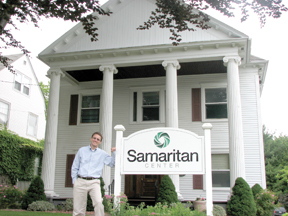 UTICA — The Samaritan Counseling Center of the Mohawk Valley, Inc. is able to add staff and serve more clients from its new, larger facility as a result of two grants.

The center received two grants totaling $188,000 from the Community Foundation of Herkimer & Oneida Counties, Inc. to purchase and renovate the three-story building at 1612 Genesee St. in Utica. The counseling center previously leased space at 1643 Genesee St.

“It’s more comfortable, it’s brighter, it’s larger,” Gregory Kovacs, the Samaritan Counseling Center’s executive director, says. The center outgrew the old space, which had fewer offices, conference space, and file space. (He did not know the square footage of either facility.) There wasn’t any room to add another therapist to handle the center’s growing waiting list, he notes.

Kovacs first approached the Community Foundation several years ago to begin the process of seeking assistance. Founded in 1952, the foundation provides grants for charitable purposes and has awarded more than 5,200 grants totaling more than $41.3 million from the 290 funds that make up its endowment.

“Once they were ready to purchase a building, our grants committee looked at it and said, ‘Maybe this is a chance to go beyond what we normally do,’ ” says Jan Squadrito, senior program officer at the Community Foundation (www.foundationhoc.org). In the past, she says, the foundation typically gave grants to help organizations purchase facilities or equipment or fund programs and services. However, recently they have noted a large number of organizations needing to invest money in their facilities for renovations or improvements.

“That limits what they can do in serving the community,” Squadrito says. A dollar spent on renovating a building is one less dollar the agency has to invest in its programs.

That’s what prompted the Community Foundation to give the Samaritan Counseling Center (www.samaritancentermv.com) two grants — $100,000 toward the building purchase and $88,000 for the renovations done by Lewis Brothers Construction of New Hartford, Kovacs says.

As a result, the center has a small loan (he did not disclose the amount) in connection with the project that it will pay off in four years and has the resources to hire an eighth therapist to fill one of the 10 offices in its new building.

The Samaritan Counseling Center is actively seeking someone to fill the therapist slot, Kovacs says. Adding that person will add an additional 1,100 hours of service to the current 6,000 hours the center provides annually, he notes.

The center is also expanding the services it offers in the larger building, now that it has space to offer activities like group therapy, he says. The third-floor conference room will also enable the center to host educational programs such as parenting classes and offer professional training sessions, he adds.

On top of expanding services in its Utica facility, the Samaritan Counseling Center is also growing through its satellite locations, Kovacs says. The center currently operates a satellite location in Hamilton, where no changes are planned, and one in Rome, where it is in the process of searching for a larger location to accommodate increased demand in that market, Kovacs says.

“We expect to be adding a third satellite office as well,” he adds. He expects the Samaritan Counseling Center will open an office in the Herkimer area by the end of summer. “There’s a huge need out there,” he says of the market.

Founded in 1980, the Samaritan Counseling Center provides family counseling, a clergy and congregation care program, individual therapy, and couples therapy. The not-for-profit organization accepts most insurance and relies on community philanthropy and other support for the balance of its funding. According to its 2010 Form 990 on file at www.guidestar.org, the center reported revenue of $558,065 and expenses of $545,142.

The center provides services to those without insurance on a sliding-fee scale.