Sales-tax receipts rise in Central New York, most of state

Rising consumer confidence and wages, as well as inflation, running at 2.1 percent in 2017, contributed to the increase, the comptroller’s report stated.

DiNapoli said local sales-tax collections across New York state totaled $16.6 billion, up $620 million from 2016. “The increase in 2017 was driven largely by growth occurring in the fourth quarter, which was nearly twice as much as each of the prior three quarters, and one-half higher than the fourth quarter of 2016,” the report stated.

Only one county in New York saw a year-over-year decrease in local sales-tax revenue. Putnam County, in the Hudson Valley, saw revenues drop 0.45 percent to $58.8 million. That was due to technical adjustments, the comptroller’s report stated. 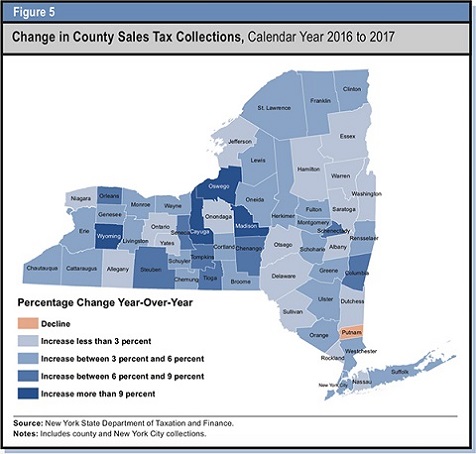