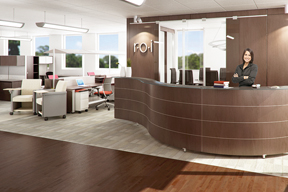 ROME — After successfully launching in the Syracuse market in 2009, roi Office Interiors is ready to expand eastward by opening a location in the Capital District.

The office-furniture supplier will open its new office and showroom at 50 State St., in the heart of downtown Albany, in June, company owner Robert Angelicola says.

“Things have been good for us in Syracuse and in Rome as well,” he says. After making it through a few stagnant years during the recession, the company is growing again and ready to fuel that growth even more with the new location.

“Now, we’re poised to take off as the economy recovers,” Angelicola says.

He selected the Albany market for several reasons. First, an Albany location will allow roi to serve customers from Saratoga to Poughkeepsie with ease, he says. Second, the market is a vibrant one with lots of growth.

Finally, the market is underserved, Angelicola says. “That economy has really been dominated by the state for years,” he says. While other markets such as Rome and Syracuse are dominated more by business customers, the Albany market has centered on doing business with the state. That was fine, he says, until the state started cutting spending.

Now, the market is dominated by about two or three dealers who have focused for years on doing business with the state, leaving plenty of room in the market for a corporate-client-focused firm like his, Angelicola says. Other office dealers in the Albany area include Nathan Office Interiors, Kimberly Scott, Inc., and Northeast Furniture Systems.

roi Office Interiors is poised to do well in the market, Angelicola says, because it has experience with corporate customers, and also has experience doing business with the state on a number of higher-education and health-care projects. The company, which counts the Air Force Research Laboratory in Rome among its customers, is also experienced doing business with the federal government.

But what really sets his firm apart, Angelicola says, is the way it works with customers.

roi doesn’t carry just a few lines of office furniture and then try to fit those products to every customer, he says. His company works with a customer to get a feel for the client and its needs.

“We’re building that furniture project specifically for that customer,” he says. “Every single project, we start from scratch.”

“They approached our website the same way we approach clients,” he says. That means the company asked a lot of questions and spent months just getting a feel for roi before it ever presented its first website template for review, he says.

The new site, with an entire area devoted to the architecture and design fields, is designed to give people ideas and not just show a bunch of pictures of office chairs.

“We just think that it shows people what we’re really all about,” Angelicola says. Included on the home page is a rendering of what the Albany office will look like once it opens, he adds.

The new office and showroom will initially occupy 4,000 square feet on the second floor of the building, but the company has an option to expand into the third floor, and Angelicola expects to do so within six months.

The company already hired someone to run the Albany office and one of the designers in Rome will be relocating to the Albany location as well. On top of that, roi will hire two more designers when the office opens, adding to roi’s total current staff of 17 employees.

With the new Albany location, Angelicola expects sales at roi to double within two years. He declined to share revenue figures.

Once the Albany office is open and running smoothly, Angelicola says he’ll turn his attention to the Rochester market as the next possible home for an roi location.

Angelicola and his wife, Lynne, founded roi as Roberts Office Interiors, Inc. in 1995. Company headquarters are housed at a 5,000-square-foot facility at 144 Hangar Road in Rome. The Syracuse office is located at One Webster’s Landing.