Reed cozies up to the microphone to launch new career 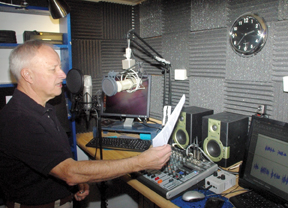 WHITESBORO — When he found himself out of a job after his position in the media-relations department at the Oneida Indian Nation was eliminated at the end of 2011, Jerry Reed decided to follow that old adage of turning lemons into lemonade by focusing on his love of voice work.

The result is Jerry Reed Voice Talent, his new full-time venture that capitalizes on his 23 years of broadcasting experience as well as his life experience in general.

The business takes voice-over work from a part-time hobby and turns it into a new career, Reed says.

“I was doing voice-over work on the side when people would ask me,” he says. He was the voice of New Hartford Plumbing’s advertising in 1990s and completed projects like corporate-video narration.

However, it was the New York Department of Labor and its Self Employment Assistance Program (SEAP) that gave Reed the push to start a full-time business. The program gives qualified people — typically those who are likely to exhaust their unemployment benefits while looking for work — a chance to start their own business while still collecting unemployment. As part of the program, Reed must take the required business-education courses and work with the Mohawk Valley Small Business Development Center on efforts like crafting his business plan.

Participating in the SEAP program has really helped Reed hit the ground running, and as a result, his business is already taking off, he says.

Reed already completed his first job doing voice work for a political candidate in Louisiana. Reed jokes that he must have done a good job since the candidate ended up winning the election.

He also recently finished a job for a Dutch advertising agency that had him reading children’s stories.

Much of Reed’s experience in voice work comes from his years in the broadcasting industry, which had him on the air from 1964 to 1987. At the end of his broadcasting career, Reed continued with a farm and rural community radio show that aired on 43 stations, including on WIBX (950 AM) in Utica for three years in the mid-1980s.

While that broadcasting background has helped, Reed says, so has the work he has done since his broadcasting days. That work includes a stint as the executive director of the New York Beef Industry Council and director of communications for the New York State Farm Bureau from 1999 to early 2001. In 2001, Reed joined the Oneida Nation, where he focused his public-relations skills on promoting the entertainment, dining, and cultural offerings of the nation, primarily at its Turning Stone Resort and Casino in Verona.

Throw all that together with a bunch of hobbies, and it gives him a pretty broad base of experience to draw upon when voicing a project, Reed says. “Those life experiences help you take on a role,” he says.

Reed does work with a voice coach in Boston and says the focus of his work with her is to make sure he’s able to sound like the “guy next door” and not just an announcer when voicing projects. He is also working with the coach to put together a demo he can share with prospective clients when auditioning for projects.

Reed, who is a member of the Society of Accredited Voice Over Artists, will be heading to New York City in the coming weeks to read for some high-profile talent agents, but also wants to spread the word about his services in the Mohawk Valley. He wants businesses in the area to know there is a new voice option in town for the myriad  projects for which they may need a voice actor. Those projects can include radio or TV commercials, corporate narration, and even less obvious things such as phone answering systems, in-store announcements, or even video games.

In between auditioning for roles, Reed is busy meeting with local radio and television stations, promoting his work on his website www.jerryreed.com, and building up his social-media base on sites such as Facebook, where he had 19 followers as of press time, and Twitter, where he had 71 followers.

Looking ahead, after landing some local accounts, Reed has his eye on making his mark nationally. “I’d like to be able to do some bigger national-type accounts,” he says. “That would be the big goal.”

In the meantime, he’s having fun forging a second career doing something he loves.

“This is a perfect opportunity for me to get out and do something I’ve dreamed of doing and hopefully make some money doing it,” he says.