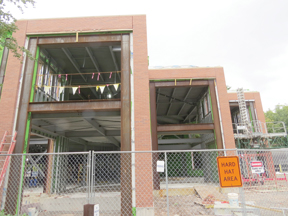 The project started during the summer of 2014 and will continue through spring 2016, says Christopher Denniston, marketing & communications manager at Rapid Response Monitoring Services.

Denniston spoke with CNYBJ on Aug. 24.

Once crews finish the facility’s new section, they’ll focus on the existing building through 2016 “to complete the full project scope,” he says.

The past few years have been the “fastest growing” in the company’s 24-year history, says Denniston. Rapid Response has generated 20 percent to 25 percent revenue growth, year over year, for the past five years.

“Additionally, the focus of the expansion is our employees, both current and future staff. And we are referring to it as ‘employee-centric.’ It’s completely around them and every aspect of the design caters to the staff,” says Denniston.

When asked about a specific dollar figure for the project, Denniston would say only that Rapid Response is expending “significant resources” on the expansion with financing through an “existing banking relationship” with an institution he declined to name.

MCK Building Associates Inc. of Syracuse is the contractor on the project, while John Neumeister of DESIGNetcetera of Cicero is the project’s architect.

Russell MacDonnell, chairman and CEO of Rapid Response, and Jeffrey Atkins, the firm’s president, are the co-owners and launched the company in 1992.

Rapid Response currently employs about 525 people, including 450 in Syracuse and 75 people at the firm’s office in Corona, California, which it opened in early 2015, according to Denniston.

“We wanted to have a presence on the West Coast to work with the West Coast dealers, and that area just presented itself as a good opportunity,” says Denniston.

The firm has business relationships with about 1,700 security installers or integrators, he says. Denniston declined to disclose any of their names, citing “confidentiality purposes.”

“They’re the companies that do the installations and maintain systems in the field and have that direct relationship with the subscribers,” Denniston adds.

The firm has to “maintain and exceed” all industry standards from organizations such as Northbrook, Illinois–based Underwriters Laboratories (also known as UL), U.S. Department of Defense, and the New York City Fire Department.

“We’re one of very few monitoring stations able to provide monitoring for [commercial] fire systems in the New York City area,” he says.

Rapid Response will hold an upcoming career fair on Sept. 22 from 10 a.m. to 2 p.m. at the Genesee Grande Hotel in Syracuse. The event will include on-site interviews for positions in areas such as customer-service, accounting, data entry, sales and marketing, and software development.

The company also held a career fair in January at Destiny USA to fill more than 70 local positions due to “record-breaking growth,” according to a news release the firm distributed then, which also included details about the expansion project.