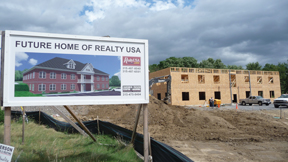 CAMILLUS — RealtyUSA, which says it is the largest independent real-estate agency in upstate New York, is constructing a three-story office building at 5110 West Genesee St. in Camillus.

The new facility — almost 16,000 square feet in size — will be RealtyUSA’s Central New York division headquarters. It will also house the Camillus branch office, which was demolished to make room for the new building, according to Mark Re, VP/general manager at RealtyUSA and the head of its CNY division.

The former Camillus branch office, which comprised about 3,300 square feet, had been too small for several years, says Re. The CNY division is currently headquartered down the street from the construction site, at 5104 West Genesee St., in a two-story building about 4,500 square feet in size.

“We’ve had these two offices two doors from each other for umpteen years, and for economies of scale, it just didn’t make sense,” Re says, explaining why he and Merle Whitehead, the president, CEO, and owner of RealtyUSA, decided to consolidate the two offices.

Construction on the $3 million project began in May, and is expected to be finished before the end of the year, according to Re. Syracuse–based Zausmer-Frisch, Scruton & Aggarwal is the design-build contractor handling the project.

The cost includes the acquisition and demolition of an adjacent house that belonged to St. Michael’s Lutheran Church, which is situated next door to the construction site at 5108 West Genesee St.

Re says he and Whitehead first approached the church more than a year ago about purchasing the house. Continued talks, which he describes as “positive,” led to the acquisition. He declined to disclose financial terms.

RealtyUSA is funding the entire project with company cash, says Re. “We have the good fortune to be secure financially,” he says. Re declines to disclose RealtyUSA’s revenue history, but says it closed 21,873 transactions in 2014, totaling about $3.5 billion.

“We’ve grown quite a bit in the last several years. So I anticipate that continuing,” Re says, adding that he made the new building larger “because I figured we would grow into it as well.”

The bottom floor of the new facility will be occupied by the 15 corporate staff members, which comprise its relocation, marketing, and accounting departments, according to Re.

The second floor will house the Camillus branch — currently working from the old division headquarters down the street — which is comprised of three staff members and about 40 independent agents, according to Re. It will have room for about 60 agents.

The top floor will provide space for a training center for the western-suburb area of Syracuse. An elevator will service all three floors.

Part of the construction includes moving the entrance to the parking lot further up Hinsdale Road, away from where it intersects with West Genesee Street where the office is being built. Re says the intersection became more dangerous after a Walgreens facility was added across the street, and this makes pulling in and out of the new parking lot safer.

Tearing down the old Camillus branch office and building a new facility was not the only option considered by the company, Re says. RealtyUSA also weighed putting an addition on the now-demolished building, but it would have left too few parking spaces.

“We were bursting at the seams, so we needed to do something,” he says. Growing the current division headquarters wouldn’t work because the entrance is too narrow, and it isn’t as ideal a location as the corner of Hinsdale and West Genesee streets, across the street from West Genesee High School.

“It is a very visible corner, it gets lots of traffic,” he says. It’s so ideal, in fact, Re claims he has had people approach the company, asking to purchase it.

RealtyUSA has received some inquiries to lease the current CNY division office, which rests on about 10 acres of land, but the company has decided to sell it.

“There’s [10] acres behind me, and so I thought this would be great to just put on the market and give somebody an opportunity to do whatever they want to do,” says Re.

He and Whitehead are handling the sale of the property, which is on the market for $699,000, Re says.

Prior to the demolition of the former Camillus office, Re says several fire departments requested to use the building for smoke training. The company agreed as a form of community service, and for several nights, the building had a dummy placed in it before being infused with smoke for firefighters to perform exercises.