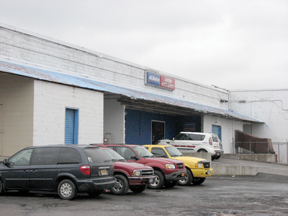 UTICA — A Syracuse businessman could breathe new life into the Bossert site located just off Route 12 in Utica.

James Ranalli, CEO of Syracuse–based United Auto Supply, which has a location in the New Hartford Shopping Center, hopes to purchase the roughly 7-acre Bossert site and build a new distribution center there for his wholesale auto-parts business.

The site, with easy access to Route 12 and the nearby New York State Thruway, is perfect for a company that guarantees delivery within 29 minutes of receiving an order, Ranalli says. “This [site] has very good accessibility.”

Ranalli has been meeting with city officials, with everyone doing their due diligence in hopes of moving the deal forward, he says. The city of Utica owns the property and the city’s Urban Renewal Agency board approved Ranalli’s preliminary development plans for the site on Jan. 25. The sale price is $130,000.

Ranalli’s plans include building a 20,000-square-foot distribution center for United Auto Supply, along with a 20,000-square-foot facility for Tracey Road Equipment, a Henrietta–based construction-equipment sales and rental company. The plan also includes a 2-acre out-parcel that Ranalli hopes will attract other businesses, such as a grocery store or a convenience store. Ranalli is working with David Baritell, an associate broker with Realty USA in Fayetteville, to develop that portion of the project.

Meetings with the city of Utica, the state Department of Transportation, the Department of Environmental Conservation (DEC), and city planning and zoning officials continue in order to gain all the necessary approvals, Ranalli says. But if everything goes as he hopes, he’ll be able to close on the property within the next 45 days and break ground by late summer.

The process thus far has been both time-consuming and costly, he says. He’s already invested more than $100,000 for preliminary design work and reviewing all the environmental documents pertaining to the site. Ranalli hired Albany–based engineering firm Clough Harbour & Associates, which has an office in Syracuse, to work on the project.

Once home to Bossert Manufacturing, the site at 1002 Oswego St. has been vacant since the metal stamping, welding, and fabricating company closed in 1985, according to the DEC. The site once contained a 210,000-square-foot production facility and was contaminated with polychlorinated biphenyls (PCBs), mercury, petroleum products, and contaminated waste. The DEC placed the site on the Superfund list in 1986 and the city of Utica acquired it in 1987. After a more than $20 million clean-up effort, the DEC removed the site from the Superfund list and declared it free of contamination and ready for redevelopment in 2008. The site is assessed at $23,000.

Now Ranalli hopes he gets the Utica Common Council approval he needs to move forward with his redevelopment plans, which will cost upwards of $1 million, he estimates. Ranalli says he has already lined up financing with First Niagara Bank for the project.

United Auto Supply currently bases its Utica operations from about 8,000 square feet of space in the New Hartford Shopping Center, but the location isn’t ideally suited to what the company needs, Ranalli says. “It’s antiquated. It has no exposure. It’s very small,” he says of the current space.

That smaller location receives daily deliveries from headquarters in Syracuse and then delivers them along to customers, he says. This has worked since the Utica location opened in 2000, but his business is growing as more people keep their cars longer and invest in repairing rather than replacing them, Ranalli says.

In addition, “The Utica location would then service our Oneida area, our Rome area,” he adds.

Ranalli says he currently employs 10 people in the Utica area, and expects he would hire 30 to 40 new employees to staff the distribution center.

Founded in 1946, United Auto Supply (www.unitedautosupply.com) employs more than 300 people across 20 locations, serving more than 7,000 customers with a fleet of 200 trucks.