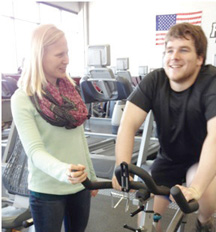 When Ashley Thayer qualified for the Boston Marathon last May, she was a first-time marathoner. Little did she know that the half-marathon she’d entered on a whim a few months earlier would lead to an obsession. But the obsession almost came to a screeching halt when she took a couple of weeks off from training and found she couldn’t even run a mile without searing pain in her side.

“My primary-care provider told me I had bursitis in my hip,” says Thayer. “And he told me I needed physical therapy. I heard about the running screening program at Canton-Potsdam Hospital’s Physical Rehabilitation Program and decided to try it,” she says.

As a former varsity athlete in team sports, Thayer had never had a problem like this before. She wasn’t sure what to expect from the Running Screening program.

“I knew I had to get serious if I wanted to be ready for Boston,” says Thayer. “I met with Laurie Matthews, PTA, who performed an analysis of my gait, balance, form, and showed me videos of myself in action,” she says.

According to Matthews, the running screening program is designed for everyone from novice to elite runners who want to perform at their peak. She’s joined in the program by Tracy French, PT, who also conducts screenings for runners and joggers everywhere from the starting line of a road race to the CPH Physical Rehabilitation Department at 49 Lawrence Ave. in Potsdam.

“The fitness of muscles and joints is just as important as cardiovascular conditioning for the best results when starting a running program or when athletes want to take their performance up a notch,” said French, who has special training in running analysis.

“Once you have identified the components of your running style that could be detrimental to your success, you can then focus on modifying your running form to become more efficient, decrease your risk of injury, decrease pain associated with running, and improve your competitive performance,” said French.

Therapy follows the initial screening, if indicated, and is individualized. “Laurie was able to identify a problem in my hip alignment that she corrected by taping my side so my muscles would have to re-learn how to move,” Thayer said. “She even involved my sister so I could get help at home taping up before a run, and she recommended a change in my shoes, too.”

Following this therapy, Thayer says she feels like she’s ready for the arduous training regimen required for Boston. As a grad student in the Community Health program at SUNY Potsdam — who spends her precious spare time as a personal trainer at the college’s Fitness Center — she’s familiar with a disciplined approach to meeting goals, and knowing when to seek help.

“I love the marathoner spirit,” Thayer says. “It’s like still being on a team, except now you’re competing against your own best performance, with a lot of people supporting you. I wouldn’t be running pain- free like I am now if it weren’t for Laurie’s help,” she says. “If you’re thinking about getting into a marathon, or just starting out a running program, the road is long but really rewarding at the end.”

For more information about the running screening program at Canton-Potsdam Hospital, interested athletes of all abilities can call (315) 261-5460.

Rebecca Faber is a runner, cancer survivor, nursing student, and public relations professional who splits her time between Potsdam and Boston. Contact her at rfaber110@gmail.com