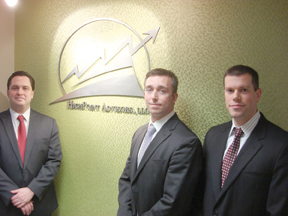 “In bigger companies, management decides what you do,” says Adam (AJ) Loedel, one of the founders of HighPoint Advisors, LLC. “We work for our clients.”

Loedel recently founded HighPoint along with Mathew Barber and Kristopher Wadsworth. The three started the firm in December, running it from their home offices until its headquarters was ready at the beginning of January.

The office was previously medical space and has been completely redone, according to Loedel. Crews even removed a shower as they converted the space, he says. Oot Bros. handled the work, and the cost of renovations is built into HighPoint’s lease.

Loedel, Barber, and Wadsworth have known each other since 2003, when they worked together at MassMutual Financial Group. They weren’t at the same firm when they decided to form their own business, however. Loedel and Wadsworth most recently worked for MetLife, Inc., while Barber worked for JPMorgan Chase & Co.

HighPoint’s founders have the chance to deal with a wider range of financial products since they started the company, Barber says. The independent firm partners with LPL Financial as its broker/dealer, giving it access to services and programs from 17 companies.

“We can all still sell a MetLife product or a JPMorgan fund,” Barber says. “We don’t have to fit anyone into a specific mold.”

The firm currently has about 150 clients and another 50 who are in the process of transferring to it. And its founders have plans for more growth.

HighPoint is looking for individual clients and small businesses. Its target business has between one and 50 employees, and the company expects interest from doctor’s offices and dental offices.

HighPoint Advisors, LLC employs one part-time administrative assistant in addition to Loedel, Barber, and Wadsworth. And, its owners would like to add four more financial advisors over the next two years.

“The goal is to eventually grow even more,” says Wadsworth. “We want to hire either experienced people or people who have potential in this business.”

HighPoint’s owners plan to fuel its growth with advertising, although they declined to share any specific plans. They will also hold financial-education workshops, according to Wadsworth.

“They would be IRA rollovers,” he says. “Wealth transfer, estate planning. We’re looking to do them every two months.”

The firm’s next scheduled workshop is April 26, according to Wadsworth. It will focus on retirement income.

Loedel, Barber, and Wadsworth declined to share revenue estimates for 2012 because they say it’s too early to offer accurate projections. HighPoint will focus on fee-based services as opposed to upfront commissions, according to Loedel.

“We’re moving as the industry moves toward fee-for-service,” he says. “That really ties the client and the advisor together.”