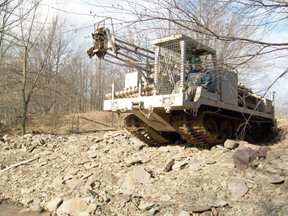 BREWERTON –– Paragon Environmental Construction, Inc. (PEC), and its subsidiary company NYEG Drilling, LLC are growing side by side and plan to make equipment and facility investments to keep expanding.

PEC and NYEG are currently located at 5664 Mud Mill Road in Brewerton. The two companies share the 8,400-square-foot office as well as equipment and employees when needed.

Peter Paragon, sole owner of PEC and NYEG, believes that the diversification and continuity between the two businesses has allowed them both to grow. He says the field people from both companies are very mobile and cross-trained in environmental and safety-related issues, so the firms can share work crews.

“We feel we have a nice turn-key operation package that we can offer support to a lot of clients from the beginning to the end of the project,” says Paragon. “It doesn’t matter if we get a piece of the project or the whole project. We may just provide drilling services and never get involved in the construction portion, and sometimes we are doing it all, from the drilling to remediation to restoration.”

Paragon says that many of the companies that NYEG and PEC competes with may offer construction or drilling services but not both.

Paragon says NYEG also owns wet/dry vacuum trucks that allow it to perform utility clearance below ground, prior to the commencement of any drilling.

Paragon had been working in the construction industry since 1987, and had found the business “intriguing.” In 1999, Paragon decided to venture off on his own, and founded PEC.

The company has grown to 56 employees after starting out with just four workers. Paragon says PEC is in the process of hiring more employees in management and in the field, and is expecting to grow to 65 employees by the end of this month.

Paragon says that PEC has been active in the construction of convenience stores and gas stations.

“The convenience store industry is roughly about 35 years old. A lot of convenience stores need to be torn down, rebuilt, remodeled, and install new state of the art petroleum equipment,” he says. “So we see a lot of that business right now. It’s a specialty business, and there are a lot of opportunities there.”

PEC has built three convenience stores in the last two years, and is looking to do more such projects.

“We have over 1,500 clients in our databank that we’ve done business with, and a lot of them are repeat clients,” he says. “We do a lot of work for municipalities, schools. We just completed a job for Hamilton County, so it’s all across the board.”

Paragon says the company’s repeat customers are mainly the local engineering, architectural and consulting firms, and national firms that have offices all over the country. He says PEC has earned a good reputation for providing strictly construction services.

“A lot of engineering firms and consulting firms are calling us because we are not a competitor for what they are doing,” he says. “A lot of companies similar to Paragon [Environmental Construction] go out there and offer that consulting service, and we don’t ... and I think that’s what makes us win.”

In May 2010, Paragon founded his second company, NYEG Drilling, LLC, an environmental and geotechnical drilling firm. Paragon says that although PEC had been doing drilling at construction sites since 2006, he decided to set up NYEG as a separate, stand-alone company because of the increasing amount of work the drilling portion of the business was performing.

“We formed a separate company to stand on its own that provides drilling services and has its own identity. And it’s been doing great,” he says. “I’ve got some great people — Jeff Grant, president; Marc Cheney, vice president; and Natalie Meneilly, project manager — who have vast amounts of experience in the line of work they perform, and as a result, things are booming.”

NYEG, a full-service drilling firm, not only does geotechnical drilling that helps collect the information for designing foundation systems for buildings, bridges, and various structures, but also provides environmental drilling services that help its clients monitor and clean up contaminated soil.

Cheney, who has been in the drilling industry for more than two decades, says the company’s geotechnical side of the business is typically busier in the fall and winter as engineers and architects usually try to get their design work done prior to the construction season.

“The environmental side of NYEG’s business typically takes place in the milder months, so we can construct wells, extraction systems, and provide injection services during months with warmer temperatures,” he says. “That’s just a nice balance. So we are busy year-round.”

Cheney says the company has spent $305,000 on equipment purchases in the past six months and has ordered a new support truck for the drill crews. It also has forged a purchase agreement on a new vacuum truck to remove excess moisture.

“This will be a highly focused service provided by NYEG for the upcoming year,” he says. “We already provide this service. However, the new unit will make us much more efficient and we will be able to pass on the benefit to our valued customers.”

Cheney says the cost of the new support truck and vacuum truck will exceed $420,000.

The companies are also planning on facility expansion because they need extra space for their equipment.

“The PEC-NYEG team has outgrown our existing warehouse and repair facility, so we are in the planning stages of building a new 12,000-square-foot facility to house the expansion,” he says.

The new addition will cost about $500,000, and should be completed by company staff this fall, says Cheney.

NYEG generated a 37-percent increase in sales during the last quarter of 2011, and has seen a steady increase in requests for proposal from clients this year, he says. The company is expecting revenue growth of 35 percent in 2012.

Last fall, NYEG acquired EARTHCON Drilling & Construction, a company based in Greenville, S.C. The acquisition was an asset purchase. Transaction terms were not disclosed. Along with the company’s name, NYEG bought EARTHCON’s drilling equipment and customer list, and hired its three employees. Serving as a branch office under NYEG, EARTHCON now provides drilling services to its clients.

Cheney says NYEG saw opportunities in South Carolina because the Greenville area is experiencing growth. After speaking with some of its existing clients who have offices in South Carolina, the company identified a need for quality drilling services in the area.

“EARTHCON primarily provided geoprobe [environmental drilling] services, and they didn’t have a real strength in [geotechnical] drilling services,” he says. “We knew we have a strength in that, so that’s why we knew we could expand that office.”

After acquiring EARTHCON, NYEG refurbished the equipment it acquired including track-mounted geoprobes, trucks, trailers, and a truck-mounted drill rig.

Paragon says PEC is planning on starting a construction division in the Greenville area by mid-summer. He says both PEC and NYEG will be enhancing the services that they currently have, and continue drilling their way to success.