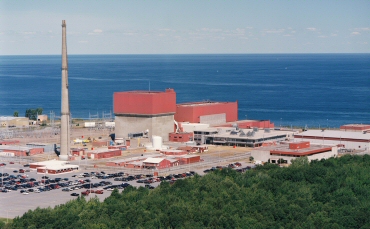 SCRIBA, N.Y. — Even though its owner has said it will shut down the James A. FitzPatrick nuclear-power plant in about a year, the Oswego County Industrial Development Agency (IDA) is continuing its work to keep it open and save more than 600 jobs.

Entergy Corp. (NYSE: ETR) on Nov. 2 announced it will close the James A. FitzPatrick nuclear-power plant in Scriba in late 2016 or early 2017.

The FitzPatrick plant employs more than 600 workers, who will lose their jobs.

The decision to close it is based on the “continued deteriorating economics of the facility,” the New Orleans–based firm said in its Nov. 2 news release.

Entergy cited “key drivers” that include “significantly reduced” plant revenues due to low natural gas prices; a “poor” market design that “fails” to properly compensate nuclear generators like FitzPatrick for their benefits, as well as high operational costs.

“They claim the plant is not profitable, so they plan on closing it. They say it’s losing … $25 million a year,” says Toth.

Once the Oswego County IDA learned that Entergy had sent a letter to the New York State Public Service Commission about its intentions to close the plant, it formed a small committee of IDA members and started working to set up coalition partners, a media campaign, and launch a website to help save the jobs at the plant.

The effort involves “doing everything we could to bring attention to the issue of possible closure of James A. Fitzpatrick and also show Entergy, the state, the people of New York state, and the governor how important that plant is to the economy of Central New York,” says Toth.

The IDA created an online video “demonstrating the impact FitzPatrick has on the community, known as the energy capital of New York state,” according to a news release the Oswego County IDA issued on Nov. 19.

It also set up a website (www.upstateenergyjobs.com), which explains how FitzPatrick’s closure will “cripple” the Upstate economy and encourages visitors to sign the “Save FitzPatrick” petition.

“Right now, our energy is focused on keeping the plant open, along with the other three nuclear plants in upstate New York,” says Toth.