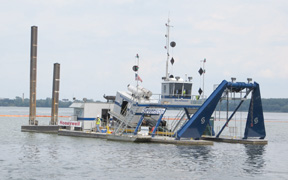 SYRACUSE — Envision hiking and biking trails, a boat rental company, and even a beach and some swimming. All could one day be an option in and around Onondaga Lake as a $1 billion cleanup project continues.

For more than 125 years, industrial and chemical operations disposed myriad pollutants into the 4.6-square-mile lake, including mercury and other heavy metals, chlorobenzene, toluene, xylene, and PCBs. Municipal sewage also polluted the lake. By 1940, swimming in the lake was banned, and in 1972 fishing was prohibited.

In 1994, Onondaga Lake became a federal Superfund site, meaning the U.S. Environmental Protection Agency (EPA) declared it contaminated and in need of remediation.

Morristown, N.J.–based Honeywell International has been a large part of the cleanup project due to its 1999 acquisition of Allied Signal, which operated a location near Onondaga Lake. Work to date has included five years of design and engineering, cleanup of upland industrial sites, and the construction of a barrier wall to keep groundwater from entering the lake before it can be treated. The state Department of Environmental Conservation (DEC), the U.S. EPA, and the state Department of Health (DOH) are overseeing the project.

Last July, work began to dredge and cap the bottom of the lake, with the removal of 230,000 cubic yards of contaminated sediment through November, says John McAuliffe, Syracuse program director with Honeywell. Dredging and capping work will resume this spring and continue through 2015 and 2016, respectively.

While Honeywell works to make Onondaga Lake a “greener” place, it’s using as many environmentally friendly methods and products as possible, McAuliffe says. “Sustainability is very important to Honeywell,” he says.

More than half of the products used for the project offer energy-efficiency benefits. Honeywell has used “green” concrete products, organic biosolids and fertilizers, biodiesel fuel, and reclaimed lumber. Solar panels and green electricity are helping to reduce greenhouse gases and Honeywell procures locally whenever it can, McAuliffe notes.

Honeywell will also create 450 acres of new habitat on the bottom of the lake, which has an average depth of 35 feet, after capping — adding more than 1 million native plants. In addition, with help from the Onondaga Lake Conservation Corps, Honeywell is restoring habitat along Geddes Brook and Nine Mile Creek.

The company has made information about the cleanup project available online at www.lakecleanup.com, and Honeywell opened a visitor’s center in November, McAuliffe says.

“People here in Syracuse really are excited about the project,” he says. So far, nearly 1,000 people have come to the visitor’s center, located at exit 7 off Route 690, where they can learn about the cleanup project first hand. Visitors can view videos about the details of the cleanup effort and look out at the lake, McAuliffe adds.

Onondaga County has undertaken its own partner efforts to ensure the lake’s water is clean and stays that way, says Matthew Millea, deputy county executive for physical services. As documented on its www.savetherain.us site, the city has not only made improvements to its wastewater treatment center, but has also implemented green and gray infrastructure to allow the county to better handle stormwater to prevent recontamination of the lake, he says. Green and gray infrastructure includes measures that help capture rainwater and prevent runoff, and that is especially important in Syracuse where the stormwater and sanitary sewer systems are combined, Millea says.

The goal is a healthy ecosystem from top to bottom, and that could, in turn, foster some economic growth around the lake, he says.

The county commissioned a report by F.O.C.U.S Greater Syracuse (www.focussyracuse.org), which showed that county residents are really interested in seeing recreational opportunities open up around the lake, Millea says. That includes access to the water, fishing, biking, and even a swimming beach. While the majority of the land surrounding the lake is publicly owned, there are opportunities for focused retail development that would further the recreational use of the lake, he adds. That could include a shop that rents kayaks and other boats or an ice cream stand.

People are energized about the cleanup project and all the potential surrounding the lake, he adds. “It was just seen as a liability and not an asset, he says. That is changing now as the cleanup progresses.

“Onondaga Lake is going to be important to the community as a healthy, sustainable asset for future generations,” McAuliffe says.