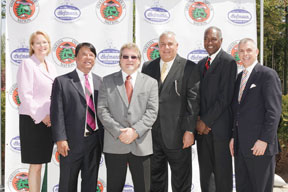 VERONA — The new owners of Hofmann Sausage Company — a group that includes a Dallas businessman and Oneida Nation Enterprises — have big plans to launch the Syracuse–based company into the national and international spotlight.

“We’re pretty excited about everything,” says Frank Zaccanelli of Zaccanelli Food Group (ZFG), which acquired Hofmann. Financial terms of the acquisition were not disclosed. The deal was first announced in a high-profile news conference at Turning Stone Resort Casino on May 7.

While energized about the plans to bring Hofmann to the next level, Zaccanelli was quick to point out in a follow-up interview that nothing else is going to change — not the hot dogs, sausage, and other meat products the company is known for, not the way they’re made, not where they’re made, and not who makes them. As the new CEO of Hofmann Sausage Company, Zaccanelli says the company will stay in Syracuse and will retain its current 30 to 40 employees.

What will change is that Central New York Hofmann fans will soon be able to enjoy Hofmann products in a host of locations from grocery stores to quick-service restaurants across the country, he says.

“This is still a Syracuse-centric company,” Zaccanelli says. He just wants to share the flavor of a Hofmann hot dog, something Syracuse has enjoyed since the company began in 1879, and spread it across the country, and, if he can, across the globe.

The process will begin Memorial Day weekend when 67 Albertsons grocery stores in Texas begin carrying Hofmann products, he says. If that goes well, he hopes to land the rest of Albertsons’ 450 stores. Zaccanelli also has lots of other deals in the pipeline that he’s confident will pan out for Hofmann.

That includes plans to develop a Hofmann quick-service restaurant concept. “We will roll those restaurants out initially in Dallas and eventually throughout the country,” Zaccanelli says. The concept will most likely include free-standing restaurants as well as walk-up restaurants suited for mall food courts and airports.

The best part, Zaccanelli says, is the cross-branding opportunities the firm will have between its restaurants and its wholesale and retail products. Each will help sell the other, he says.

The nation receives solicitations for business deals on an almost daily basis, Halbritter says in an interview. The Hofmann deal just stood out as a solid one, he adds. It dovetails nicely with the nation’s desire to invest in the region.

“We thought it would be a very nice investment,” Halbritter says. “I think it has such potential.”

He didn’t disclose how much Oneida Nation Enterprises has invested.

The deal’s potential is driven by the quality of the product, Zaccanelli, a Syracuse native, says. That quality is what will drive Hofmann’s success as a national brand, he says.

Rusty Flook, former president of Hofmann, remains active with the company as vice chairman of the board, founding family member, and investor.

Based in Syracuse, Hofmann Sausage Company (www.hofmannsausage.com) is a meat manufacturer and distributor that offers more than 80 products at a variety of retail locations and online.