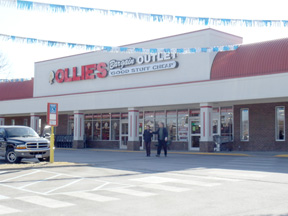 JOHNSON CITY — Ollie’s Bargain Outlet, which closed its Johnson City store during last fall’s flooding after just a month in business, will reopen the 778 Main St. location at 9 a.m. on Wednesday, Feb. 15.

The store first opened for business on Aug. 3, but closed shortly after Sept. 8 when five feet of floodwater filled the store and caused major damage to the merchandise and electrical components.

“We had to replace all of the merchandise in the store,” Jerry Altland, vice president of real estate for Ollie’s, said in a news release. “A new cement floor was laid and a new electrical transformer was installed due to damage.”

Ollie’s retained the original management team at the store and some staff members from the first opening, but has also hired about 45 new employees for the reopening, company officials said.

“Because of the great response we received in August, we’re even more excited to reopen and bring good stuff cheap to folks who may still be rebuilding after the flood,” Ollie’s President and CEO Mark Butler said. The company does not disclose revenue figures.

Last summer, in an interview with The Greater Binghamton Business Journal, Butler said the Southern Tier was an ideal market for Ollie’s, which has seen a boost in business since the recession as more people are looking for bargains. About 114,000 people live within a five-mile radius of the Johnson City store and have an average household income of $65,000.

Ollie’s leases a 30,000-square-foot store from Levin Management Corp. of Plainfield, N.J. Located in River Plaza, Ollie’s anchors the plaza along with Home Depot. The plaza is also home to Window World and A&A Beauty Supply, with two more spaces available for lease, according to Levin’s website at www.levinmgt.com.

In New York, Ollie’s has two stores in the Syracuse area, two in Rochester, four in Buffalo, and one store each in New Hartford, Kingston, Watertown, and Middletown, in addition to the Johnson City location.