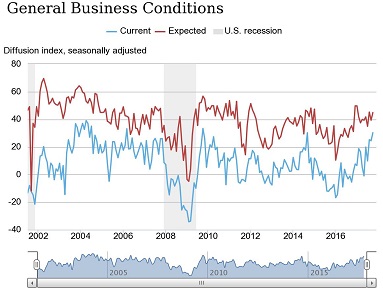 The index fell less than a point to 24.4 in September after climbing 15 points to 25.2 in August, which, at the time, was its highest level since September 2014.

A positive reading indicates expansion or growth in manufacturing activity, while a negative index number points to a decline in the sector.

The results of the October survey indicate that business activity “grew at a robust pace” for New York manufacturers, the Federal Reserve Bank of New York said in a news release issued Monday.

The new-orders index came in at 18.0 and the shipments index rose 11 points to 27.5 — readings that pointed to “ongoing solid gains” in orders and shipments, the New York Fed said.

Both input prices and selling prices rose at a “somewhat slower” pace than last month.