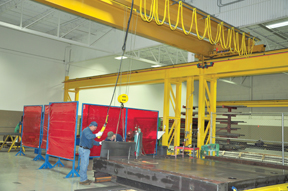 CLAY — O’Brien & Gere may be best known locally as an engineering firm, but the company’s manufacturing operations account for 10 percent of its revenue and sales in that business are growing.

O’Brien & Gere produces industrial furnaces and other heat-treating systems used in industries like aerospace, defense, automotive, energy, and health care. The firm relocated its manufacturing unit from a site in Fayetteville to a 160,000-square-foot location in the town of Clay late last year.

The new space is actually slightly smaller than the old building, but the floor plan is wide open and flexible. O’Brien & Gere also added overhead cranes, a paint booth, and other upgrades that will allow it to handle the growth it sees ahead in manufacturing, says Stephen Palin, senior vice president for O’Brien & Gere’s Denton TSI brand of furnace and heat treating-systems.

Manufacturing sales rose 40 percent in 2011 and are projected to jump 50 percent this year, Palin says. O’Brien & Gere spent about $3 million of its own money on upgrading the new manufacturing space, he adds, and received no government incentives or other aid for the project.

The Clay site is a better location for much of the facility’s work force, Palin says. Many of the employees in the manufacturing unit come from the North Country, so it’s an easier drive than Fayetteville. About 80 people work at the Clay plant, which is located on Morgan Road and formerly was the home of Rollway Bearing.

O’Brien & Gere employs another 320 people at its headquarters in downtown Syracuse. The firm, which generated

“We see this as one of the fastest growing parts of our business,” O’Brien & Gere CEO James Fox says of manufacturing. “It’s a differentiator for us.”

That’s because O’Brien & Gere provides the electronics that control its furnaces and material-handling technologies that load
them as well. The company gives its customers a complete system, rather than just pieces, Fox notes.

Much of the work involves crafting highly customized equipment to deal with specific metals at high temperatures, he adds.

The firm’s customers use its equipment to manufacture items like bearings, wind- turbine blades, and even replacement hips. The manufacturing unit also produces air quality products and the new facility includes a lab for testing wastewater treatment technologies.

O’Brien & Gere’s manufacturing business has traditionally been focused on the Northeast, but that’s changed with the addition of a national sales manager, Palin says. O’Brien & Gere is now pushing its products into Texas, the Pacific Northwest, and California.

And the industries the company serves are here for the long haul, Fox adds. High-value work in sectors like aerospace seems to be returning to the U.S., he says.

Customers for the manufacturing unit include firms like GE and Pratt & Whitney.

The company relocated its headquarters to downtown Syracuse from suburban DeWitt in 2010. It occupies three floors of the six-story Washington Station building at 333 W. Washington St.