N.Y. manufacturing index rises in February to highest level since last May 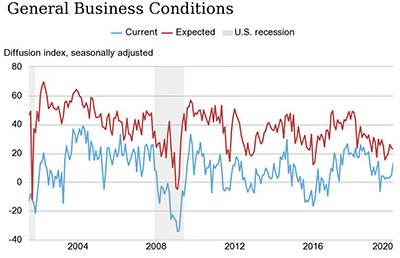 The Empire State Manufacturing Survey general business-conditions index rose 8 points to 12.9 in February, “its highest level since May of last year.”

New York manufacturing firms reported that business activity “grew at a faster pace than in recent months,” the Federal Reserve Bank of New York said in its Feb. 18 report.

The February reading, based on firms responding to the survey, indicates “business activity picked up in New York,” the New York Fed said.

A positive index number shows expansion or growth in manufacturing activity, while a negative reading indicates a decline in the sector.

Economists had expected a reading of 4.0 for the February general business conditions index, according to a survey by Econoday, a California company that tracks economic reports. So, the report exceeded expectations.

The new-orders index climbed 16 points to 22.1, its highest level in “well over a year, indicating that orders rose significantly,” the New York Fed said.

The shipments index rose 10 points to 18.9. Delivery times were longer, and inventories “climbed.”

The prices-paid index moved down 7 points to 25.0, pointing to a slower pace of input price increases this month, while the prices-received index edged up 2 points to 16.7.

The index for future business conditions was little changed at 22.9. The indexes for future new orders and future shipments edged lower. Employment and hours worked are expected to grow “modestly” in the months ahead.

The capital-expenditures index came in at 22.0, and the technology-spending index was little changed at 21.2.