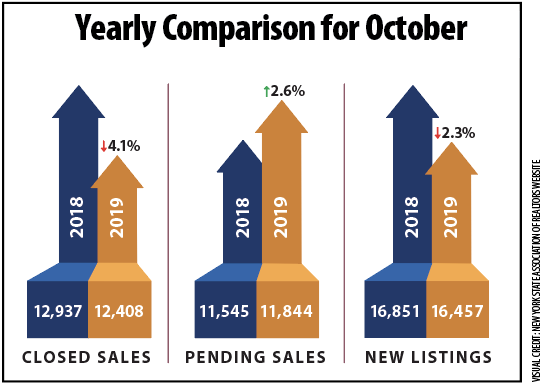 New York realtors sold 12,408 previously owned homes in October, down 4.1 percent from the 12,937 homes they sold a year prior, as the inventory of homes for sale fell.

The declining inventory of homes helped push the statewide median sales price up to $280,000 in October, up 8.1 percent from the October 2018 median of $259,000, according to the NYSAR data.

The months’ supply of homes for sale at the end of October stood at 6.1 months, per NYSAR’s report, down from 6.5 months a year earlier.

A 6-month-to-6.5-month supply is considered to be a balanced market, NYSAR says.

Realtors in Onondaga County sold 512 previously owned homes in October, down 0.6 percent from the 515 homes they sold in the year-ago month. The median sales price rose 7.6 percent to $156,000 from $145,000 a year earlier, according to the NYSAR report.