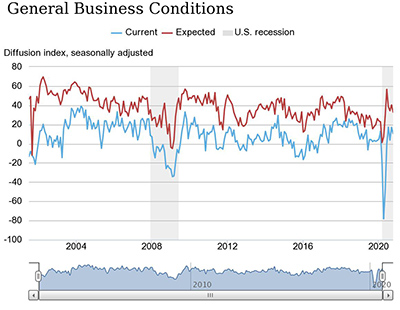 The Empire State Manufacturing Survey general business-conditions index fell 7 points to 10.5 in October, representing its fourth consecutive positive reading, but indicating a slower pace of growth than in September.

The index had climbed 13 points to 17 in September.

The October index number — based on firms responding to the survey — indicates business activity “expanded modestly” in New York state, the Federal Reserve Bank of New York said in its Oct. 15 survey report. The 10.5 reading was below an Investing.com forecast of 15.0 and a Wall Street Journal forecast of 12.3 for the index.

A positive reading indicates expansion or growth in the state’s manufacturing activity, while a negative index numbers points to a decline in the sector.

The new-orders index climbed 5 points to 12.3, and the shipments index rose 4 points to 17.8, indicating “ongoing gains in orders and shipments,” the New York Fed said.

The index for number of employees moved up 5 points to 7.2, indicating that employment levels grew. The average workweek index rose 9 points to 16.1, a multi-year high, signaling a “significant” increase in hours worked.

The prices-paid index was little changed at 27.8, a sign that input prices rose at the same pace as last month. The prices-received index held “fairly steady” at 5.3, indicating a small increase in selling prices for a second consecutive month.

The index for future business conditions fell 8 points to 32.8, suggesting that firms remained optimistic about future conditions, but were “somewhat less positive” than last month.

The indexes for future new orders and future shipments posted similar readings. The index for future employment climbed to 23.2, with 35 percent of respondents expecting to increase employment levels in the months ahead.

The capital expenditures and technology-spending indexes both fell to 11.9.